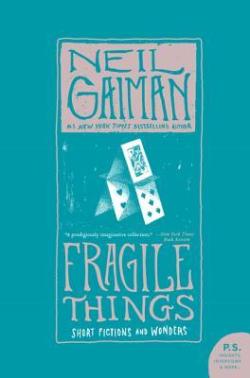 Fragile Things: Short Fictions and Wonders is a 2006 collection of short stories and poems by Neil Gaiman. Most of the pieces contained within are actually reprints, previously having appeared in anthologies, literary magazines, music albums, and in one case paired with a picture in a photography book. Most relevant to some, perhaps, is the final novella-length story The Monarch of the Glen, which is a sequel to the novel American Gods that takes inspiration from the story Beowulf. This book also contains the story “How to Talk to Girls at Parties” which was adapted into a film in 2017. END_OF_DOCUMENT_TOKEN_TO_BE_REPLACED

In the deft hands of Neil Gaiman, magic is no mere illusion . . . and anything is possible. In Smoke and Mirrors, Gaiman’s imagination and supreme artistry transform a mundane world into a place of terrible wonders—where an old woman can purchase the Holy Grail at a thrift store, where assassins advertise their services in the Yellow Pages under “Pest Control,” and where a frightened young boy must barter for his life with a mean-spirited troll living beneath a bridge by the railroad tracks. Explore a new reality, obscured by smoke and darkness yet brilliantly tangible, in this extraordinary collection of short works by a master prestidigitator. It will dazzle your senses, touch your heart, and haunt your dreams.

Smoke and Mirrors by Neil Gaiman is a collection of “short fiction and illusions,” originally published in 1998. From what I gathered reading it, most if not all of these stories had been published before as part of different collections or anthologies. I’ve been a rather big fan of Gaiman for a number of years now, but admittedly this is the first time I’ve read any of his short fiction outside of comic books. I was interested to see just how much a departure in format would change his style of writing, as I have recently been noticing common trends in his novels. As it turns out, his short fiction varies quite widely in terms of subject matter. END_OF_DOCUMENT_TOKEN_TO_BE_REPLACED