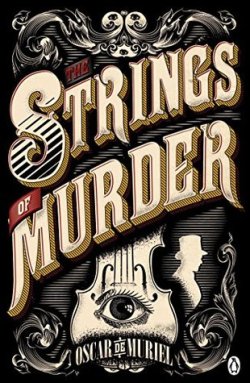 The Strings of Murder by Oscar de Muriel is a 2015 mystery novel, the first in the “Frey & McGray” series of books. Set in 1880s, the story follows Ian Frey, an inspector for London’s Criminal Investigation Department (CID). After a series of personal disgraces largely outside of his control, Frey is sent by Scotland Yard to Edinburgh, Scotland, where they fear a copycat Jack the Ripper has made his first murder. With the Ripper still eluding apprehension in London, the pressure is on to solve the case quickly and quietly. This will not be easy however, as the violinist victim was somehow butchered in his own sealed bedroom, after taking all of the keys inside with him. There’s no clear evidence of how the murderer got in or out, and the presence of occult symbols at the crime scene only serves to excite the interest of Adolphus “Nine-Nails” McGray, the head of the paranormal subdivision leading the investigation, much to Frey’s chagrin. END_OF_DOCUMENT_TOKEN_TO_BE_REPLACED

Men at Arms by Terry Pratchett is the 15th novel in the author’s Discworld series and the 2nd book in the sub-series about the Ankh-Morpork City Watch. Sam Vimes, captain of the city’s Night Watch, is getting married soon to the wealthy Sybil Ramkin. On his wedding day he intends to retire, hanging up his badge after many years of service. In the meantime, he has to deal with a handful of new recruits foisted upon him by the city’s Patrician in the name of diversity; a troll, a dwarf, and female werewolf. Trying to get the Watch in order before his departure is enough trouble, but matters are made worse as somebody in the shadows has been getting ideas about the rights of kings and destiny. Believing he has discovered the rightful king of Ankh-Morpork, this person steals a secret and deadly weapon to upend the current social order and make way for this king’s return. END_OF_DOCUMENT_TOKEN_TO_BE_REPLACED 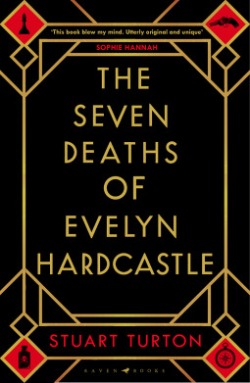 The Seven Deaths of Evelyn Hardcastle is Stuart Turton’s debut novel. Set in an English country manor in the early 20th century, our protagonist awakens in the forest yelling the name Anna but remembering nothing else. He is mysteriously guided back to Blackheath manor, a rundown old estate owned by the Hardcastle family, who are hosting a ball to celebrate the return of their daughter Evelyn from Paris. While struggling to remember who he is, our protagonist soon learns that his mind is inhabiting the body of someone other than himself. He will cycle throughout eight different host bodies, reliving the same day at Blackheath over and over, until he solves the mystery of Evelyn’s murder. Guided by a mysterious figure in a plague doctor outfit, he must contend with two rivals to solve this mystery. The answer is the key to their freedom that only one of them can claim. END_OF_DOCUMENT_TOKEN_TO_BE_REPLACED

Set in the Irish Midlands in the 1850s, Emma Donoghue’s The Wonder is a historical novel following Lib Wright, an English nurse and trainee of the famous Florence Nightingale (the pioneer of modern nursing). She is brought to rural Ireland at the request of a committee of locals to act as sentinel to an 11-year-old girl named Anna O’Donnell. She and her family claim that through God’s will she can live without eating, and has supposedly done so for three months already. Lib’s job, working in shifts with a nun, is to continuously watch the girl for two weeks to see if she is indeed a miraculous child or merely conning her community and the people at large who flock to see her. END_OF_DOCUMENT_TOKEN_TO_BE_REPLACED

Us is a 2019 horror film written and directed by Jordan Peele. As a child, Adelaide Wilson (Lupita Nyong’o) had a traumatic experience after wandering off from her parents at a boardwalk carnival. Wandering into a house of mirrors, where the power cuts out, she encounters another little girl who appears to be her exact double. Years later, still haunted by her childhood experience, Adelaide, her husband, and her two kids take a summer vacation to Adelaide’s family home in Santa Cruz, California, where she first had her harrowing experience. Their vacation is fraught with tension, but takes a turn for the horrifying when they are besieged by their doppelgangers, who suddenly outside their door in the middle of the night. END_OF_DOCUMENT_TOKEN_TO_BE_REPLACED

Life in a small town takes a dark turn when mysterious footage begins appearing on VHS cassettes at the local Video Hut. 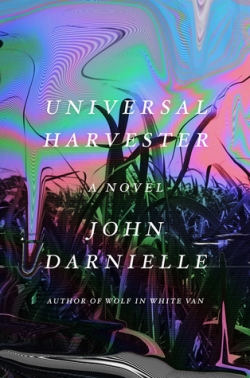 Universal Harvester by John Darnielle is a 2017 mystery/fiction novel set in the late 1990s. The story follows Jeremy, a man in his early twenties who works at his local Video Hut, a dead-end job he finds palatable because it gets him out of the house and makes his daily life predictable. He lives with his father; his mother having died six years previously in a car wreck. His daily monotony is interrupted when he starts to notice a trend of people complaining about “something else” being on the tapes they’ve rented. Troubling, homemade footage not a part of the movie. It’s a premise that I found quite tantalizing, as I’m sure many others have. An effectively simple concept that promises to unsettle, yet you feel drawn in. Despite how this sounds, however, this book is not a horror story. END_OF_DOCUMENT_TOKEN_TO_BE_REPLACED

There are three ways up to Castle View from the town of Castle Rock: Route 117, Pleasant Road, and the Suicide Stairs. Every day in the summer of 1974 twelve-year-old Gwendy Peterson has taken the stairs, which are held by strong (if time-rusted) iron bolts and zig-zag up the cliffside.

At the top of the stairs, Gwendy catches her breath and listens to the shouts of the kids on the playground. From a bit farther away comes the chink of an aluminum bat hitting a baseball as the Senior League kids practice for the Labor Day charity game.

One day, a stranger calls to Gwendy: “Hey, girl. Come on over here for a bit. We ought to palaver, you and me.”

On a bench in the shade sits a man in black jeans, a black coat like for a suit, and a white shirt unbuttoned at the top. On his head is a small neat black hat. The time will come when Gwendy has nightmares about that hat…

Gwendy’s Button Box, a novella written by Stephen King and Richard Chizmar, is a twist on a familiar story/social experiment. I was immediately reminded of the 2009 film The Box, based on the Richard Matheson short story “Button, Button” and previously adapted into an episode of The Twilight Zone by the same name. The story more or less always goes that an enigmatic man gives someone a box with a button on it. If they push the button two things will happen: they will receive a sum of money, and someone will die. What follows is the expected moral dilemma. While I’m certain this book is meant to recall these tales, the situation here is actually a lot more complex. END_OF_DOCUMENT_TOKEN_TO_BE_REPLACED

Marlowe’s about to give up on a completely routine case when he finds himself in the wrong place at the right time to get caught up in a murder that leads to a ring of jewel thieves, another murder, a fortune-teller, a couple more murders, and more corruption than your average graveyard.

Farewell, My Lovely is the second novel by Raymond Chandler that follows the hardboiled Philip Marlowe, who works as a private detective in Los Angeles in the late 1930s. Marlowe, though not the first of his kind, feels like the quintessential pulp/noir detective character. He’s intelligent, tough, heavy-drinking, wise-cracking, desired by women, and yet a loner in his personal life. At the same time, the novel has a certain humanity to it that made it unique while towing the genre’s lines. END_OF_DOCUMENT_TOKEN_TO_BE_REPLACED