The High Republic: Into the Dark by Claudia Gray is the first YA novel in the Star Wars: The High Republic multimedia series, which is set 200 years before Star Wars Episode I. Jedi Padawan Reath Silas may not be as Force-sensitive as his peers, but the young apprentice works hard to earn his mettle within the Jedi Order, determined to become one of its great scholars. His ideal routine of plunging into the Archives of the Jedi Temple on the planet Coruscant is stripped away, however, when his Master, Jora Malli, becomes the Jedi commander of Starlight Beacon, a space station on the Republic frontier in the Outer Rim territories of the galaxy.

Reath isn’t the adventurous type, but where his Master goes he must follow. Travelling to Starlight separately from her,  with Jedi Masters Orla Jareni and Cohmac Vitus, and Jedi Knight Dez Rydan, he is struck with trouble sooner than expected. A disaster in Hyperspace forces their transport ship to seek refuge on a derelict space station, along with a number of other refugee spacecrafts. While the reason for the catastrophe eludes them, the station itself holds a dark secret: an overbearing presence of the Dark side of the Force that Reath and his fellow Jedi struggle to understand. If they’re not careful, a nightmarish scourge that has been dormant for eons could be released upon the galaxy. END_OF_DOCUMENT_TOKEN_TO_BE_REPLACED

My Last Summer with Cass is the newest graphic novel by author and illustrator Mark Crilley. The story follows two young artists, Megan and Cassandra, who are on the cusp of adulthood. Though they’ve been friends since they were young children, their time together was limited to the summers their families shared with each other at a cottage in Michigan, where the girls created all sorts of art together, nurturing each other’s talents. This summer tradition came to a sudden end, however, with Cass and her mother moving to New York.

Three years later, Megan convinces her parents to let her stay with Cass in Brooklyn while they are on a business trip. Reunited after so long, Megan is introduced to a world of art like she’s never experienced before—and a friend who has changed a lot in three years. The big city offers big opportunities, both exciting and scary, but as their personalities begin to clash, putting their art at risk, can their friendship survive? END_OF_DOCUMENT_TOKEN_TO_BE_REPLACED

Through the Woods is a comic book collection of short horror stories written and illustrated by Emily Carroll. Each of the five tales touches upon death, transformation, and brushes with the forces of the abyss that are the unknown in our world. Three girls receive strange visitations after their father fails to return from a hunt, a young man is troubled by the return of his brother, whom he killed, a young woman learns the value of telling stories about monsters, and more. Each bears with it the motif of the woods, an enchanting yet dangerous place where such strange things can come from. END_OF_DOCUMENT_TOKEN_TO_BE_REPLACED 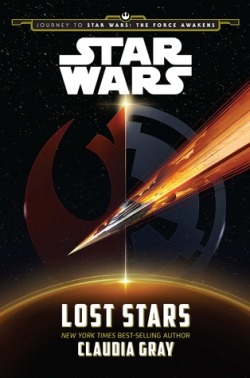 Released as part of the Journey to Star Wars: The Force Awakens series of media, Lost Stars by Claudia Gray is a standalone Young Adult Star Wars novel with a largely original cast of characters. It follows the lives of two childhood friends, Thane Kyrell and Ciena Ree, starting when they are only children on the day their home planet of Jelucan is annexed by the Galactic Empire. Growing up with aspirations of joining the Imperial Academy and one day becoming pilots, the pair are inseparable as they work to achieve their dreams. But war looms on the horizon as rebel forces become more and more prominent, thrusting them into a conflict that forces them down opposing paths and challenges whether bonds of loyalty and love for each other can survive the ravages of war. END_OF_DOCUMENT_TOKEN_TO_BE_REPLACED

Ahsoka Tano, once a loyal Jedi apprenticed to Anakin Skywalker, planned to spend the rest of her life serving the Jedi Order. But after a heartbreaking betrayal, she left the Order and forged her own path. Anakin and the other Jedi were still there for her, though, whenever she needed them—or they needed her.

Then the Emperor took over the galaxy, and the Jedi were ruthlessly murdered. Now Ahsoka is truly on her own, unsure she can be part of something larger ever again. She takes refuge on a remote farming planet, where she befriends a young woman named Kaeden and begins to carve out a simple life for herself. But Ahsoka cannot escape her past, or the reach of the Empire. When Imperial forces occupy the planet, she must decide whether to become involved—even if it means exposing her identity. Her choices with have devastating effects for those around he…and lead her to a new hope for the galaxy.

Star Wars: Ahsoka by E. K. Johnston follows the titular character and former Jedi Padawan Ahsoka Tano, a popular character from the Star Wars animated series The Clone Wars and later Rebels. This is a novel that exists specifically to fill a gap, as she is a character that disappeared from the storyline before the ending of the former series, only to appear again in the latter, much more grown and experienced. I was interested in reading this as a fan of the series, wanting to know more about an impactful character who unfortunately was not originally conjured as part of the prequel trilogy of films. END_OF_DOCUMENT_TOKEN_TO_BE_REPLACED