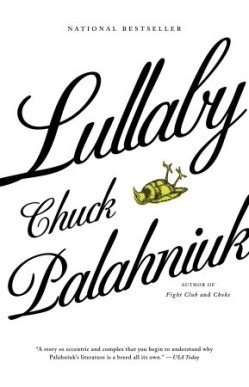 Though it took me longer than I had planned, this past week I finished reading Lullaby by Chuck Palahniuk. The novel follows Carl Streator, a reporter who discovers that unsuspecting parents are reading a deadly poem to their children on page 27 of Poems and Rhymes from Around the World — an ancient culling song meant to give a painless death to the old or infirm. The lyrics of the culling song kill whether spoken or even thought. Streator begins a cross-country quest to destroy all remaining copies of the song and save humanity from its disastrous effects.

This novel presents an interesting challenge for review, because it’s not exactly a straightforward story. More specifically, the plot is technically rather basic. There’s more to it than the synopsis above, but at a basic level that is all the plot is about. This is not a criticism, however. As I made my way through the story, waiting for something more to happen to raise the stakes, I realized the plot doesn’t matter here. Thinking about it, the plot doesn’t entirely resolve either. At least, not the plot that is presented above.

The novel came to be a good example of depth within narrative; you have what the story is about — the synopsis above — and then you have what the story is really about. Lullaby is about a group of people on a cross-country hunt to destroy copies of the culling song. Lullaby is also, at its heart, about suffering and power. Power as something corrupting and gluttony-inducing in human beings. Suffering as something that consumes you and leaves you broken, and the ways we can try to move past it.

The characters were what made the novel as impactful as it was, particularly our protagonist Carl Streator, who somehow managed to be relatable, sympathetic, yet detestable at the same time. The entire ensemble — Carl, Helen, Mona, and Oyster — all managed to present themselves in both positively and negatively, for that matter, leaving them all feeling ultimately very human. I couldn’t bring myself to hate any of them, no matter how grating or awful they could be as people.

For all the novel’s discussion of misery and struggling over power, however, it also possessed a very dark sense of humour that balanced out the more depressing aspects of the story. What I liked particularly was that Helen was a realtor who apparently specialized in buying and selling legitimately haunted houses as a scam, reselling houses at a profit after the previous tenant is scared off the premises by paranormal occurrences. It didn’t have any connection to how the story played out or resolved itself, but was a very memorable quirk that helped to balance tone and left a lasting impression. It wasn’t at all out of place, however, as it also represented a model of people using the supernatural as a means of gaining control and power, while at the same time exploiting the suffering of others, which ties in thematically with the rest of the story.

Lullaby is the second Palahniuk novel I have read now after Fight Club and I am happy that I continue to enjoy his work. I would recommend it to anybody with an interest in unconventional fiction that isn’t intimidated by narrative that isn’t always straightforward. I found the haze that is Streator’s first-person perspective a little jarring at first, but I was also able to adjust quickly. This novel leaves me eager to eventually get to Invisible Monsters, which has sat on my shelf unread far too long.