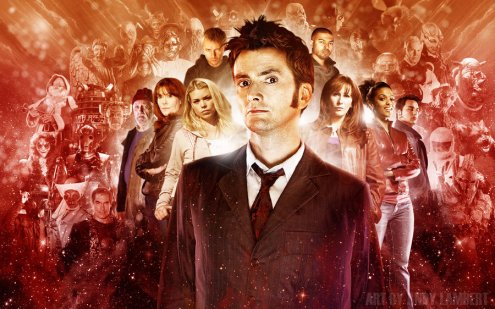 As I’ve mentioned and written about a number of times already, I have been watching a lot of Doctor Who. I refrained from writing about the show during October, since I wanted to focus more on horror in honour of Halloween. Now that we’ve entered November, however, I feel free to return to the well of Doctor Who once more for a topic of musing.

At this point, my friends and I are almost completed the sixth season, so we are well into the Matt Smith period of The Doctor. Despite this, however, I feel I need to pay my respects to the tenth Doctor, David Tennant, who has easily been my favourite of the three incarnations of the Doctor I have known so far.

There’s something my father always does after he finishes a book, where he cannot start another because he feels he is in a period of “mourning” for the one he has just finished. He does not move on to something new because he is still feeling the effects of what he has finished reading and needs time to let that settle. While I quickly embark upon a new reading, viewing, or playing endeavour after finishing, I also understand this desire to “mourn,” which has motivated me to write this post in honour of the tenth Doctor, who I still feel affected by despite the hours of Matt Smith since then.

When compared to Eccleston’s and Smith’s versions of the Doctor, I feel something quite special was done with Tennant’s. He had the same whimsical, charming, and brilliant nature that the ninth Doctor had before and we continued to see in the eleventh, but it was how he changed during his three seasons that mattered so much. He had an edge to him that I hadn’t seen before or since. I don’t mean to say that Smith’s or Eccleston’s never got their hands dirty or made tough decisions, but Tennant as the tenth Doctor would sometimes cross boundaries where we couldn’t always stand with him morally.

The moments like these the most memorable to me are his dealing with the Empress in the Christimas Special “The Runaway Bride,” his treatment of The Family during the conclusion of “The Family of Blood,” and his hubris at the end of “The Waters of Mars.” These moments, along with others, helped to punctuate how the life he was leading was adversely affecting him in his current incarnation.

These three seasons in particular had the most consistent amount of change as well, each companion having changed by the end of each season due to complications the characters had gone through. This helped to push the tenth Doctor down a darker path, where loss was more common, forcing him to use more extreme measures.

These more negative aspects of his character — if you wish to even call them that — were so effective to me because of how starkly contrasted they were to how brilliant he could be at his best. Despite these edgier moments he was still deeply compassionate, insightful, curious, and eager to not just be the best he could be, but bring out the best in everyone he met.

To put it simply, I loved the tenth Doctor because he was everything the Doctor should be, but he was also the most flawed. I think my favourite moment of this was during his final episode, when he realizes how he is going to die — which involves doing so to save Donna’s grandfather. He has a choice, but we all know he is going to save the old man, including the Doctor himself, yet that doesn’t stop him having a brief moment of emotional outrage. The Doctor isn’t just upset about the circumstances, he briefly behaves indignantly about it, going so far as to sound offended that what does him in his having to save an ordinary old man, and not something extraordinary like what he has just survived.

I was sad to see the tenth Doctor have to regenerate, punctuated by his final words “I don’t want to go,” but it felt perfect because the character had reached the end of his rope. He’d conquered his greatest opponents, but had also flown too close to the sun too many times. In his own words “I’ve lived too long,” and though that was likely a reference to the Doctor as a 900+ year old being, I feel it was also in reference to that incarnation. Being the Doctor had pushed that incarnation too hard and too far, compromising who he was. He’d reached a point where he had to change or be destroyed, and regeneration was the only way he was going to change in a way that would save him and grant him a fresher start.

I was sorry to see David Tennant go as the tenth Doctor, making way for Matt Smith as the eleventh, but I feel that the timing was perfect, and not only did it regenerate the character, but the narrative as well. While the continuity is the same, it gave the storyline a fresh start, which was much needed after rollercoaster that was the tenth Doctor’s run.