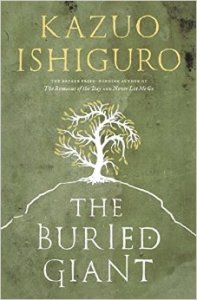 The Buried Giant is the seventh and latest novel by Kazuo Ishiguro, published on March 3, 2015, and it is the author’s first novel in a decade.  It follows Axl and Beatrice, an old Briton couple living in Britain after the Romans have “long since departed.” In this world falling into ruin nobody seems able to remember much of the distant, or even recent, past. The couple embark upon a journey together to find their long lost son, whom they scarcely remember. Their travels through this misty and forgetful world threatens their love for each other as it brings them closer to their veiled past.

Ishiguro is best known for his previous novels The Remains of the Day and Never Let Me Go, both of which I have had the pleasure of reading. It was my knowledge of these previous works that first drew me toward reading The Buried Giant, and I was excited to see the author telling a story that appeared to be in the fantasy genre.

As it turns out, the genre of this novel has been subject of some controversy, with Ishiguro being called a snob by fantasy genre champions for some comments he made questioning how readers may receive his work. I’m not particularly interested in covering this subject in depth, so I will simply remark that while fantasy elements and tropes do exist in the story — such as their departure from their familiar and understood home into a land of mystery and otherworldly forces — it is also very much grounded in human experience and mundanity. The otherworldly forces, in particular, are often speculative or superstitions. The story is fiction that uses fantasy elements.

From an idea standpoint, I really love a lot about this novel. The ideas proposed and explored by the story in relation to the mass amnesia everybody is suffering from are very compelling. Whether it’s at the personal level between Beatrice and Axl, or the societal level between Britons and Saxons, there are interesting concepts at play that do explore a lot about trauma, memory, and healing. I was left with a lot to consider, which is always a good takeaway from a novel.

The problem that I had, however, was my inability to connect with the characters on an emotional level. I feel a lot of this had to do with the amnesia factor present throughout most of the story. While Ishiguro does a good job of conveying characters who are trapped in the present — rarely informed by past experiences outside of fleeting recollections — this created characters who were phenomenally boring. This was particularly the case with Axl and Beatrice. Their love for each other seemed sincerely conveyed, but that’s pretty much all there is to them.

Axl frets about Beatrice, occasionally reflecting on cloudy memories, and Beatrice seems passively anxious and confused most of the time, trying to pretend nothing is wrong neither physically nor with their situation. While I couldn’t find myself disliking them, their presence was benign and almost matter-of-fact. I found their dialogue to be very droning as well. The voices I was inspired to imagine they had were dispassionate, responding to situations politely but with little sense of investment. With the protagonists seeming to lack investment in their situation, I had trouble doing so myself.

There are other characters that become actively involved in the plot, who do offer something more interesting character-wise. The Saxon warrior Wistan, for instance, had some dimension to him that I really liked. He was driven in his ultimate mission in the story, but was conflicted by the consequences in a way that I could actually feel through the narrative. I’m left why wondering he wasn’t instead the protagonist, having more wits about him than almost everyone around him. Obviously Ishiguro had a specific story he wanted to tell, and I’m not faulting him for that, but I would have been more interested in a different focus.

My opinion about his novel seems to detract from what I’ve run in to. While reception has been more mixed than positive all around, I have seen a lot of reactions praising it as a heartbreaking, haunting story that seems to have moved a lot of people. That being the case, it may just be it didn’t work for me personally. There were a lot of great ideas that Ishiguro presented clearly enough that I was invested in them as ideas, they were just poorly executed for me through the characters that he used. If you’re interested you should check it out. It’s definitely well written, but it’s far from being one of his better works.