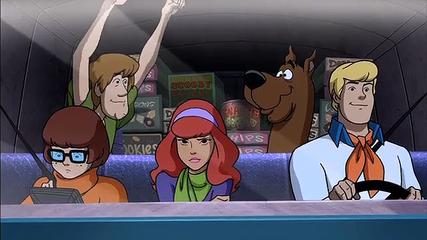 Having been curious since it came out, this past week I watched Scooby-Doo! WrestleMania Mystery, a direct-to-video movie co-produced by Warner Bros. Animation and WWE Studios. I’ve been a casual fan of pro wrestling and the WWE for a few years now, and I grew up enjoying a lot of Scooby-Doo, so the idea of the two pairing up seemed both bizarre and entertaining.

The movie played out exactly as anybody familiar with a Scooby-Doo storyline would expect, complete with red herring antagonists, really convoluted technology and plot devices, and an obvious twist reveal on who the monster really was. I understand the intended audience, so I’m not going to fault the movie for all this. It was a lot of fun to watch.

It really does surprise me how much Scooby-Doo seems to have managed to stay relevant in popular culture. Specials like this one continue to be released, and there always seems to be a new or ongoing series, despite the fact that you seem to be able to jump in at any point and it’s still the same familiar formula. While doing this, it maintains a decent level of entertainment value for what it is.

Many writers and storytellers may bemoan the idea of doing something familiar to what’s popular, but it is important to remember the power of familiarity, and that mixing up and playing with familiar storylines has as much merit as trying to do something new and ground breaking. While Scooby-Doo doesn’t exactly stand as a stellar example of this, the franchise is clearly doing something right as its presence continues, and I’d be hard-pressed to attribute this success simply to branding.

The little twist that made this special so much more enjoyable to me was the presence of WWE superstars. While it was far from presenting their full roster in the voice cast, its integration WWE and the pro wrestling subculture in the world of Scooby-Doo was hilarious to behold. While I appreciate a lot of the technical move sets and athleticism that is involved in pro wrestling, I’ve always really enjoyed how over-the-top and ridiculous the spectacle can really be.

The presence of the WWE in this universe fully embraced these latter ideas, having the organization exist in the world in a way I wish could be replicated in reality. All of the superstars seem to be made to live in WWE City, where every business is a pun on an old superstar or famous move and the denizens are committed to the lifestyle of the pro wrestling fandom. Kane wanders around the woods at night, John Cena can lift cars and stop boulders, bears wrestle and hold grudges, and luchador is its own kinetic language. It presents an accurate (in my mind) interpretation of what the WWE is if it could only shed off some of the limitations of the real world.

The icing on the cake to this whole treatment of pro wrestling was the reasoning for Scooby and Shaggy to get in the ring. Scooby has been framed for stealing the WWE Championship belt, and before being arrested for this crime (with Shaggy roped in as his accomplice) they are given the opportunity to instead fight for their freedom in the ring. This is apparently an accepted and practiced form of justice in WWE City, and the very idea of it slew me.

There isn’t too much of depth I have to talk about this movie. It’s dumb, but that’s what makes it compelling. It was simply a lot of fun for me and I wanted to share my experience with it. If you have any place in your heart for pro wrestling you should check it out.