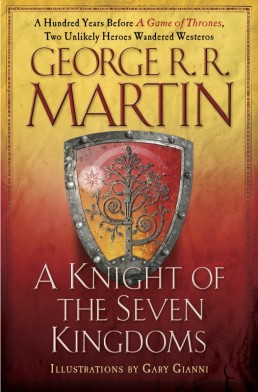 A Knight of the Seven Kingdoms by George R. R. Martin, published in 2015, collects the first three prequel novellas to the popular A Song of Ice and Fire series. The stories collected are The Hedge Knight (1998), The Sworn Sword (2003), and The Mystery Knight (2010). Set nearly a century before A Game of Thrones, each story follows the young hedge knight Dunk, also known as Ser Duncan the Tall, and his squire Egg as they adventure across Westeros during a time when the Targaryen family still holds the Iron Throne.

It is difficult to talk about this book without comparing it to the main series of novels, despite their plotlines being completely unrelated to each other. The writing style is very similar to what I am used to from the Ice & Fire series, but the stories are a lot smaller in scale. There are some politics related to the Targaryen family that weaves its way throughout each story, but Dunk’s experiences trying to make a name for himself and live up to the ideals of knighthood take the forefront.

While set in the more grounded world of Westeros, these stories feel a lot more like typical fantasy, though that’s not a bad thing. While I love the expansive plotlines and characters present in the main series, as well as the subversion of typical high fantasy story elements, it was a welcome to change to have a more strictly mundane approach to the world. Dunk is a good-natured, honourable hero who for once isn’t going to suffer a cruel fate in an unforgiving world.

Dunk has also become one of my favourite characters to grace Westeros. His naïve, apprehensive, and sometimes bashful nature contrasts well with his brute strength, bravery, and determination. His natural ability is at odds with his lack of experience, and it shows really well in each story. It’s believable when he succeeds, but you’re never sure if victory is in store for him or not, as he does suffer a good share of failures too. Despite being uneducated he has better judgment than he gives himself credit for as well, but still makes simple mistakes. Simply put, he’s a well-rounded character and I found myself endeared to him rather quickly.

This collection includes black and white illustrations by Gary Gianni that beautifully supplement each story, without distracting from the text too much. The minimal yet realistic style also helps it feel more appropriate for a gritty world like Westeros. I like them enough that I think they wouldn’t be amiss in the Ice & Fire books as well, though perhaps used more sparingly since those stories are more content heavy.

The only problem I did have with the book was with the fact that it’s a prequel, so experience with the main series has given me a lot of knowledge as to the fate of Dunk and Egg. It wasn’t a huge problem for me, but some of the tension dissipates when I already know they will ultimately get out of situations relatively unscathed. The two characters have so much growing to do, however, even by the end of the third story, that it is not too much of a problem. Their journey is still something I want to see more and more of.

A Knight of the Seven Kingdoms scratched an itch that definitely needed satisfying while I wait for release of The Winds of Winter. The book is also a refreshing take on the world of Westeros, while not straying too far away from the elements fans love.