“Something Happened Here, But We’re Not Quite Sure What It Was” by Paul McAuley is a complex sf story about politics and xenophobia when human colonists on an Earth-like planet are faced with the possibility of reaching out to alien cultures, especially when a big organization that has previously done harm is in charge of the operation. 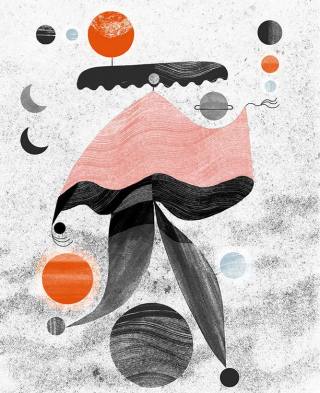 While a little long-winded, I have to admit it was the title of this story that grabbed me more than anything else. While I was aware it was a science fiction story, I love the more terrifying implications of a title like this. I love obscurity I can wrack my brain over, even if I won’t get clear answers. This is easier said than done, however, and unfortunately this story did not quite hit the mark.

While set on an alien world, the setting has a very small-town American feel to it. The town of Joe’s Corner is adjacent to an alien ruin called the City of the Dead, which is often raided for artefacts and utilized as a tourist attraction, which accounts for much of the town’s revenue. While little is understood about the former denizens of this city, much of what they have left behind project psychic visions, feelings, or even ghosts — sometimes called “eidolons” — which can be potentially harmful. It is the incomplete understanding of what these structures and items are that makes what happens unclear to those involved.

I really like the idea of exploitation of alien ruins on a colonized world. I think it reflects an uncomfortable reality of human nature. To me, the idea of a massive alien ruin right next door is fantastical, but here it has been reduced to a roadside attraction. There were so many alien details and terms to absorb, however, that I at times found it more confusing than intriguing. There are many names of different alien races or anomalies thrown our way with little context for what they mean. While it only requires a little bit of work on the part of the reader to connect some of the dots on these by the end, I found it to be a little too convoluted.

Descriptions of alien artefacts are also so particular at points I wonder at how the narrator actually knows about them, since it is implied to be a layman’s perspective. It feels like a contradiction to describe these objects as specifically using algorithms, for example, when it is otherwise a grounded perspective rather than that of an expert.

Like any good science fiction, the story does do a great job of reflecting upon society as it is now, despite its not so distant future of planetary colonization and alien tourism. Corporate distrust, fear mongering, overzealous activism, and hypocrisy permeate the text, specifically when it comes to the xenophobic overtones it presents.

Leah Bright, who leads protests against the installation of radio telescope arrays to search for further life, completely ignores that fact that she and all other people are only living on this planet through the support of a more advanced species known as the Jackaroo. Furthermore, these people so frightened of other species make their living by essentially pilfering the remains of another that came before them. Despite all this they are deeply against making contact with any new life in the galaxy, using a tragic incident from the past involving these very artefacts they profit off of to justify their mistrust of the project.

Considering all that we hear happens during the incident the title is concerned with, I do find it very interesting to speculate upon. The end result is clear, but everything that went on and the root cause is a mystery. The problem I have is I did not feel intimately involved enough with what was going on to get truly invested, and this had to do with the narrator. They are a nameless resident of Joe’s Corner, recounting events yet giving us nothing about who they are. It’s presented as hearsay, and while that does contribute to the mysterious nature of the story I do wish I had a character I could more concretely connect with.

All things considered, “Something Happened Here, But We’re Not Quite Sure What It Was” is an enjoyable short science fiction story with an intriguing premise and good ideas, only really faltering for me in the execution. There’s a lot to explore with what it establishes, however, and I’d be interested to see it fleshed out more. Apparently this story is connected to a novel McAuley has written already, so it may be better understood if you have experience with his work already. I have not seen obvious reference to what that work is, however. The story was accessible enough on its own for me, though, regardless of my problems with it.

If you’re interested in reading it the story can be found here.