Roland Deschain and his ka-tet are bearing southeast through the forests of Mid-World on their quest for the Dark Tower. Their path takes them to the outskirts of Calla Bryn Sturgis. But beyond the tranquil farm town, the ground rises to the hulking darkness of Thunderclap, the source of a terrible affliction that is stealing the town’s soul. The wolves of Thunderclap and their unspeakable depredation are coming. To resist them is to risk all, but these are odds the gunslingers are used to. Their guns, however, will not be enough…. 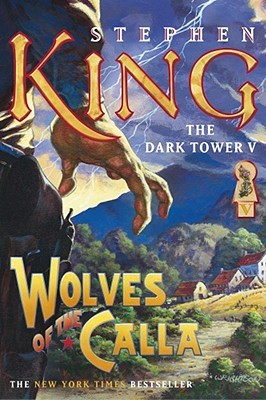 Wolves of the Calla by Stephen King, the fifth book in his series The Dark Tower, is one I’d been wanting to get to for some time. After reading book four, Wizard & Glass, and then The Wind Through the Keyhole (4.5), I had had my fill of flashbacks and side-stories. Though it was without the addition of the latter, I can only imagine what the wait must have been like for fans who’d been reading the series since 1982. I enjoyed those books very much, but even I was more than ready to continue following Roland and company on their quest.

On the whole, this book did not disappoint. It was great to fall in with the ka-tet again, getting into their heads and watching as they deal with new people, overcome new challenges, and face turmoil among themselves. Regardless of the story, there is just something about this group of characters that I love so much and they continued to be engaging to read about. They have such distinct voices — the narration weaving back and forth between them all — that I’m enthralled by.

The story, while it does drive the penultimate plot forward, took its time a lot more than I would have liked. Their battle against the wolves does seem related to their quest, but the novel still feels a lot more like a side-story. A lot of time is spent getting to know the people of the Calla; people I can only assume will not matter to the plot much longer. Despite this, the novel is about 700 pages long and this conflict does not reach its climax and conclusion until the end. To give credit where it’s due, the confrontation’s build up was quite suspenseful to me, having me at the edge of my seat as things were about to kick off.

Regardless, however, for its page count it felt like only a few steps were taken toward progressing the quest, especially when compared to previous entries. They spend much of their time in one place — the Calla — preparing the townsfolk to help fight the wolves, while intermittently travelling to New York City to deal with developing matters there.

We get a good deal more flashbacks in the form of storytelling as well, especially focused around Father Callahan — who was originally a character from ‘Salem’s Lot, another Stephen King novel otherwise unrelated to this series. He recounts to Roland and co the events of his life following his departure from that novel up to his arrival in the Calla. Having not read ‘Salem’s Lot I couldn’t appreciate his appearance in the story as much. I did enjoy his tale for what it was, but it was a little tiresome to be spending time in past events once again.

I have such ambivalent feelings toward the novel as a whole, because I enjoyed it as a singular thing; I like the people of the Calla and enjoyed reading as the ka-tet intermingled among them, learning their vernacular, their culture, and earning their trust. All the same, I do wish the story had been more concisely handled for the sake of the series. I don’t feel King necessarily needed 700 pages to tell this story. What I did appreciate a lot was the groundwork it laid throughout for subsequent books in the series, as well as the further world-building it provided. King only slightly tips his hand in hinting at what is to come, but it was enough to keep me engaged and my speculation going strong.

I don’t feel like there’s much else I can say about Wolves of the Calla without getting too much into detail about the series itself, which is more than likely to start spoiling things. As the fifth book I can’t exactly talk about it as something you should give a try either, since it’s quite an investment to get this far. What I will say is the series’ acclaim continues to be well earned. Grounded, yet strangely surreal, it wonderfully blends the fantasy and Western genres in a post-apocalyptic setting that continues to be as captivating as it can be nightmarish. Despite the hiccups noted I feel nothing but excitement about pressing on further.