The last thing the wizard Drum Billet did, before Death laid a bony hand on his shoulder, was to pass on his staff of power to the eighth son of an eighth son. Unfortunately for his colleagues in the chauvinistic (not to say misogynistic) world of magic, he failed to check that the baby in question was a son. Everybody knows that there’s no such thing as a female wizard. But now it’s gone and happened, there’s nothing much anyone can do about it. Let the battle of the sexes begin… 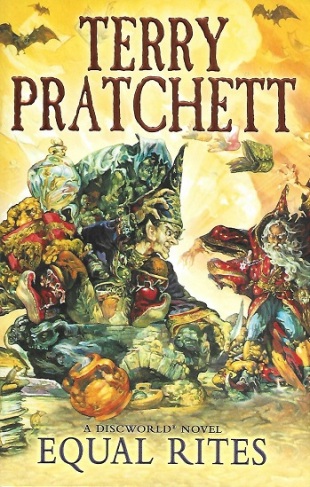 Equal Rites by Terry Pratchett is the third novel in the fantasy comedy Discworld series, this time focused on a new cast of characters. While I enjoyed the perilous escapades of Rincewind and Twoflower, I have been looking forward to reading about characters who aren’t quite so hapless. The story follows Eskarina Smith, a young girl who inherited a wizard’s staff at birth and has an unbridled knack for magic. She is accompanied by Granny Weatherwax, an old witch who serves their community and takes it upon herself to guide Esk into the magical arts.

For much of the novel the crux of Esk’s situation is more philosophical, physical impediments becoming a factor later on. There has never been a female wizard before. Even Granny at first refuses to entertain the idea. Esk is at first held back by tradition and unchallenged belief that it cannot be. Granny and Esk’s father try to cover it up after her birth, and when her magical interests become too prominent later on Granny tries teaching her to be a witch. Her lack of control over her immense amount of power, thanks to the staff, makes it plain that she must seek instruction from the wizards at the Unseen University.

Though humorously approached, the gender issues seemed too simply presented to me at first. At the forefront they are apparent through negation: Esk seeks education saying “Yes I can,” while the community and the wizards say “No you can’t.” Reading between the lines a little more, I did find that the argument for equality is more artfully woven into the story than I’d initially though. Each respective school of thought is simply a different way of approaching the same natural phenomenon. When considering this along with Granny’s practice of Headology — which is essentially the idea that belief shapes reality — it’s easy to see how their institutional structure is held together by how they believe things to be rather than what is possible.

The subtext is clear when analyzed, there just isn’t any point where a character exposits the information for the reader’s benefit, which I think was the better way to go about it. At the end of the day the story is more lighthearted, and doing so would have been a tad too preachy.

A good balance is struck between the two sides as well. While Granny is stubbornly driven to defy what even she considers to be the norm, she is guilty of the exact same prejudices in the reverse. Warlocks, or male witches, are an absurd notion to her, and while wizards look down on witchcraft she clearly doesn’t hold wizardry in high regard either.

The characters are evocative and a lot of fun to read about. Granny is wise and capable, but a lot more unsure and inexperienced than she lets on. Esk, while intelligent and capable, is still childlike, retaining a bold and curiously naïve approach to the people and places she encounters. This often goes array as her powers act more upon her whims than her will, which helped to keep things interesting.

The plot is where the book felt flimsy to me, good characters notwithstanding. They spend a lot of their time meandering along before getting to the university, going through some bumps in the road that were fun but not of much consequence to the overall story. Despite where Esk ends up during the more dramatic climax the progression did not feel logical or well earned either. She does complete a character arc of sorts, but the conclusion wasn’t cohesive with the rest of her journey. Granny’s arc was a lot better defined, but as much as I like her I wish she hadn’t stolen the show so much from Esk. It was still an enjoyable story for what it was, establishing a lot more about the nature of magic and the Discworld universe, I just wish its plot hooked me better.

Equal Rites was still an entertaining read. The humour is a little subtler this time around, which I found to be an improvement. It still wears it on its sleeve, just not as on-the-nose as the previous two books. The writing style is witty and deceptively clever, articulating a world that I wanted to laugh with as much as speculate upon. The gender politics could have been more deeply explored than they were, but I don’t feel the subject was done any disservice. It is the third book in the series so some prior experience would be handy, but it is quite accessible as well, if you’d rather pick and choose from this extensive series. I don’t feel this will have been one of Pratchett’s best for me, but it’s still worth the read.