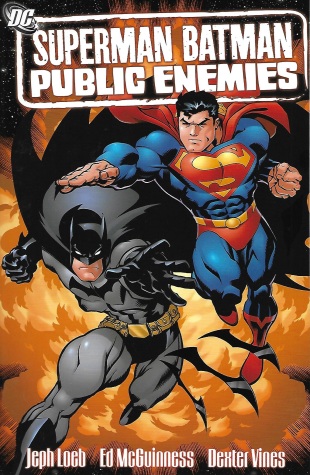 A tale of loyalty and unlikely friendship featuring two of the most famous super-heroes on the planet, Superman/Batman: Public Enemies pairs the Man of Steel with the Dark Knight. The iconic heroes unite when President Lex Luthor accuses Superman of terrible crimes against humanity and assembles a top-secret team of powerhouse heroes to bring Superman in. But the “World’s Finest” duo are determined to topple the corrupt president’s reign once and for all!

Having not done this in a while, I thought I’d featured a book that, once again, I have no idea how or why I acquired it. I’m aware that it’s enough of a well-known story to have been adapted as part of the DC Universe Animated Original Movies line back in 2009, but that’s pretty much it. I enjoy the two characters independently enough, however, that I wanted to read the two paired up.

The series originally premiered in August 2003 as an update to the previous series World’s Finest Comics, which frequently teamed Batman and Superman together. This volume collects issues #1-6. This story arc is alternatively titled “World’s Finest.”

The storyline in this book is rather action oriented. Most plot points are in service of pitting the duo against a flurry of more enemies, be they villains looking to cash in on President Lex Luthor’s $1 billion bounty on Superman’s head, or the heroes under his authority tasked with bringing the Man of Steel in. It was fun to read, but largely just a spectacle. The action is a fair amount of fun to read, with some decently tense and creative moments. While victory for the “world’s finest duo” is a foregone conclusion, it never felt like I was just watching them bowl over all opposition.

There’s very little substance to the plot itself, and the duo act a little out of character to me at times. Lex’s accusations against Superman are vague, but the asteroid is a very real threat — which is what Lex blames him for. They seem most concerned with confronting Lex above all else, despite the calamity fast approaching. They do have a plan for dealing with the asteroid, but for some reason the details are withheld and kept vague, despite not being particularly elaborate nor adding much suspense. Too much happens off page, seemingly for the convenience of just filling in the details/holes later.

A prominent stylistic choice in the writing is back and forth internal narration from both Batman and Superman. These boxes help to flesh out the characters’ relationship and how they feel about one another, be it admiration, frustration, sympathy, or disagreement. Oftentimes they are just singing each other’s praises, unsubtly emphasizing their feelings. While I can understand the decision to include this in a series specifically pairing the two, it was used far too often. I feel perhaps more focus should have been put into the art to express these ideas instead of constant internal monologuing.

The dialogue is also immature in spots, making suggestive jokes or quips that fall pretty flat — though rarely from the duo themselves. On at least two occasions references are made to the size of Power Girl’s breasts, as well as characters desires to make-out with or be in a confined space with a heroine. Lex also open-mouth kisses Amanda Waller at one point and I’m not entirely sure why. This is not a slight against Waller (nobody screws The Wall), I just found the moment bizarre. Regardless, all of these instances felt awkward and out of place, the flashiness of the story not withstanding.

McGuiness’s pencils are very reminiscent of the style of Bruce Timm, who did the art of various DC animated series, which I liked a lot. This lent itself well to the cartoony, flashy nature of the story. The colours are nice and vibrant too, which I do appreciate in contrast to some of the more dark and drab stories I find myself reading. A lot of the male characters look substantially beefier than one would see in Timm’s style though, which can look too silly to me sometimes. I specifically mean moments where they look so muscular that they appear to be swelling or inflating — like they could pop. This is not the case for every male character, just enough of them that it stood out. Other than that, the characters are well drawn, the designs are wacky in a tonally appropriate way, and included are some great full-page and two-page spreads — such as a giant composite Superman/Batman humanoid spacecraft.

I may have been a bit harsh with the story, but it just didn’t do much for me personally. It did seem to me, however, that the book was more self-consciously having fun with itself and the characters than being a simply shallow piece of work. It didn’t have much substance regardless, but I can forgive it considering how much it doesn’t take itself seriously in spots. The only aspects that did feel like it took too seriously were the internal voices of Batman and Superman. I get it, you guys don’t always agree, but gosh darn it you respect each other. Man, those two guys love each other. Superman/Batman: Public Enemies is good for a light, action-packed read, but I wouldn’t go far out of my way to add it to my collection (and I literally didn’t).