From the strong oral culture of his own Ojibway Indian heritage, Basil Johnston presents the first collection by a Native American scholar of legends and tales depicting manitous, mystical beings who are divine and essential forces in the spiritual life of his people. These lively, sometimes earthy stories teach about manitous who lived in human form among the Ojibway in the early days, after Kitchi-Manitou (the Great Mystery) created all things and Muzzu-Kummik-Qua (Mother Earth) revealed the natural order of the world. 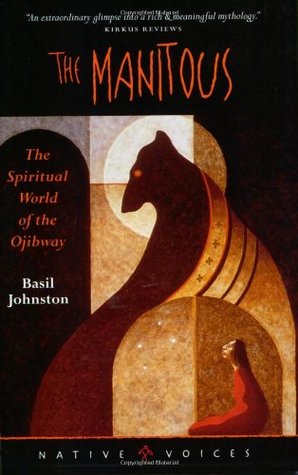 The Manitous is a collection of stories about the spiritual beings that inhabit the world of various Native North American tribes with a shared language, referred to within as the Anishinaubae people. Rather than simply cataloguing different examples of what the Manitous are, Johnston contextualizes what exactly a Manitou is, starting with the misunderstanding by European settlers and colonizers of what the Anishinaubae were referring to — the word “manitou” having many different connotations in their language. We come to understand the roles various Manitous played in the lives of the people, and the effect their ilk had on cultural development.

Where helpful, particularly in the introduction, Johnston incorporates some anthropology into the book by providing further context about who they people were and where they lived. This helped me get over the hurdle of properly understanding a new cultural viewpoint. Another hurdle for this is the language, which is a bit more difficult. I recall when I first started reading up on Greek mythology that my unfamiliarity with different terms and names was such that I forgot nearly everything I read from the first book I picked up. While I may suffer similar issues here, there is a glossary at the back that helps to remind the reader the meaning of different words, also giving further background information than what is found in the stories themselves.

The book starts off at a more macro-scale, covering Kitchi-Manitou (the “great mystery” that created everything) and Muzzu-Kummik-Qua (Mother Earth). From there we learn about foundational heroic figures of the Anishinaubae people. These are sons born of the Manitou Ae-pungishimook and a woman named Winonah. Half Manitou themselves, these sons set out becoming prominent figures in the establishment of different cultural customs, such as recording history, the invention of certain dances and music, discovering how people can commune with Manitous, and other important practices. Though not exhaustive, I really liked how this explored what Manitous are while laying out a greater understanding of the foundation of Anishinaubae customs. From there it goes smaller to benevolent sprites, muses, and other forms of Manitous that inhabit the world, good and bad.

The chapters are fairly digestible, though some are a lot longer than others. Most of these stories would probably be better experienced through listening rather than reading, having come from an oral tradition, but they’re still pretty enjoyable to read even if they’re not written in strictly traditional prose. There are some wonderful stories that not only explore the origins of the Anishinaubae people’s traditions, but also impart some of their more respectable values about humanity’s place in the world and how we ought to treat our cotenants on this planet. Particularly effective was the final chapter on the Weendigoes, the cannibalistic giants whose insatiable appetite for human flesh embodies negative human qualities such as indulgence and excessive consumption. In the latter section of this chapter this is made to reflect modern capitalistic society in a rather poignant way.

The Manitous is a great introduction to the foundation of certain First Nation’s spiritual beliefs, providing context along with a wealth of stories to give you a good starting point to understanding Anishinaubae beliefs. If you’re interested in learning about North American mythology this would be a great book to start with. Of  all books on mythology, this one has most felt like it’s given me a solid base of knowledge to expand upon with further reading.