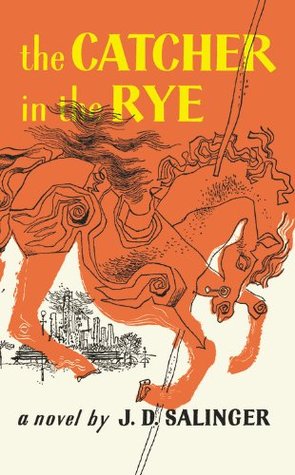 The Catcher in the Rye by J. D. Salinger is a 1951 novel about a young man named Holden Caulfield who has flunked out of his private school. It starts in the days before Christmas break, after which he will not be returning to the school. Instead of waiting out the remainder of his days there, he leaves without telling anyone, heading into New York City, where his family lives, and spending a few days there unattended.

It feels particularly odd to me to be reviewing The Catcher in the Rye. It is a widely-taught book, after all, and notoriously challenged as a literary work, so it seems everyone and their mother has an opinion about it. I frequently read in public and this is the only book where people have commented on my reading it. It’s also a book that’s apparently quite divisive in other ways. Though celebrated as a modern classic, a lot of people don’t seem to like it very much as a story, objectionable content aside.

For a while I didn’t like it much either. Holden’s voice as a narrator takes a lot of getting used to. The colloquial language didn’t give me much trouble, he just has an inelegant way of expressing himself. Sentences sometimes sound disjointed or repetitive, and he ends them with “and all” a lot, which at first annoyed me. As I got accustomed to it, however, it stopped bothering me, and I think it’s worthy of praise that he actually sounds like a teenager recounting an event — which precisely how the story is framed.

There is no plot to speak of, other the set up for why he is in New York City. The story’s concern is everything and anything that Holden observes and feels as he tries to enjoy his time in the city. We visit numerous places around town, meeting colorful and shady characters as he does. Considering when it was published it is quite striking the sordid things this sixteen year old gets up to, as well as what he witnesses. It’s never graphic, but nevertheless surprisingly upfront.

I understand how he became the poster boy of teenage angst, cynicism, and alienation, as expressed in the flavour text I found about it on numerous places online, but these factors are not what changed my mind. I’d gone in expecting them, and a little arrogantly I decided part way through that it probably had nothing in store for me that would surprise me. I also related to so many people’s frustrations with Holden himself. He’s hypocritical, often acting “phony” or insincere himself while internally berating the world around him for doing the very same thing. His mistakes are largely his fault, yet he’s so critical of the rest of the world and seems unwilling to do anything himself to change his situation.

As I got further and further along, however, and learned more of Holden’s past experiences and his feelings I realized something I did connect with, making me eat my own words (the book could surprise me after all). This is not a profound revelation, but generally the places I’ve seen talking about the book didn’t bring this up: Holden Caulfield is deeply depressed. This is what struck a cord with me. The events of the book can be attributed to a massive depressive episode for him. I saw it in the apparent aimlessness of his wanderings through the city, his desire to get away from everybody yet near-desperately reaching out to connect with others he doesn’t even seem to like, his contempt for the insincerity of the world around him yet flagrant participation in it, and his yearning for something nebulously more respectable and meaningful from life.

His depression felt at its s to me when visiting his kid sister Phoebe, who scolds him for once again flunking out of school. After he gives a menagerie of excuses about why he hated the school she accuses him of not liking anything. When challenged to retort he stumbles, he can’t come up with anything other than someone linked to a tragic event at a previous school and his love for his siblings. I frequently have trouble feeling true, gripping enthusiasm about a lot of things, which made this moment feel particularly raw. It was a rather startling change in tune for me toward the book, all things considered. I went from bored with the whole affair to legitimately moved by it.

If not for its writing style, I enjoyed The Catcher in the Rye for its humanity, and hitting me in a vulnerable place unexpectedly. It’s a young man’s unfiltered, uncertain take on a world he’s not comfortable growing into. I’m happy to say I finally got around to reading it, since I bought my copy so long ago. I would recommend it to those interested in reading classic literature, though frankly it’s likely you’ll be made, or have been made to read it at some point already. Hopefully you get something from it too.

2 thoughts on “Book Review – The Catcher in the Rye by J. D. Salinger”