David Sedaris tells all in a book that is, literally, a lifetime in the making.

For forty years, David Sedaris has kept a diary in which he records everything that captures his attention-overheard comments, salacious gossip, soap opera plot twists, secrets confided by total strangers. These observations are the source code for his finest work, and through them he has honed his cunning, surprising sentences.

Now, Sedaris shares his private writings with the world. Theft by Finding, the first of two volumes, is the story of how a drug-abusing dropout with a weakness for the International House of Pancakes and a chronic inability to hold down a real job became one of the funniest people on the planet. 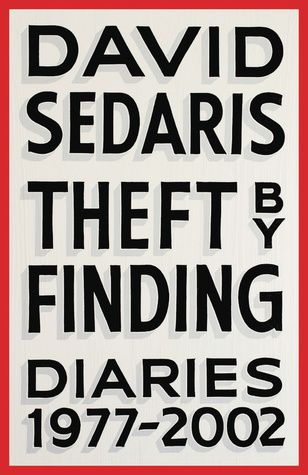 Theft by Finding: Diaries (1977-2002) is the first of two volumes collecting the diaries of David Sedaris, curated by the author himself. This book is specifically his edit. Of all the entries written in this 25 year span he only included a fraction of what he wrote, selected by himself. He edited some of them for clarity, altered names and appearances where appropriate, and reformatted them for presentation and readability.

Though refined, there is a certain raw quality to the entries. We are treated to the very first one on September 5, 1977, which is a mere three sentences long, giving us little information other than who he is with and where they are. Though an autobiography of sorts, context is something the reader has to work for. At the outset I found this a little off-putting. The way the entries are naturally sectioned leads me to feel each would be of some substance, but a good number, especially in the earliest years, are rather mundane and offer little profound or interesting on their own. As I read through them, understanding built up thanks to the small details that help to grant context. You don’t quite get a truly deep dive into the goings-on of his life in a given year, but enough to trace how it is, what he’s been doing, and where it could be going.

True to the words of his introduction, more the half the time these entries are not really about himself, but the conversations he has or overhears and the people he encounters. Sometimes these are colourful, humorous occurrences of quirky and/or unusual people he hears about on the radio, people at one of his jobs, or those he eavesdrops on in the IHOP, a frequent haunt of his for reading for a period of his life. Others are rather stark, showcasing the uglier faces of society. Whether it’s someone audaciously bullying him for a cigarette, flagrantly racist remarks from coworkers, or overheard/witnessed instances of abuse, Sedaris doesn’t hold back in what he records. It’s often a grim reminder not just of how messed up some people are, but how backwards the world can be when these people get away with seemingly little consequences.

In typical Sedaris fashion we seem him presented in a number of lights. Though witty, endearing, and increasingly successful — sometimes in spite of himself — he frequently appears unflattering. Whether he consciously meant to be at any given time is hard to say, but he is very frank when talking about himself and his desires. We seem him at low points with drug/alcohol use as well as financial troubles. We also see him cowardly, judgmental, inactive (when he perhaps should be otherwise), inelegant, and selfish. It’s never in a way that I would consider him deplorable, but rather an honest expression of a person that I can connect with and relate to on some level.

What he spends a surprisingly sparse amount of time doing is writing about his writing career, at least as far as what he’s chosen to include in this volume. Entries about his stories/books getting published are brought up suddenly, without much lead-up, discussion of their inception, or the process of getting published itself. I would have liked to have read more about that, though as a good trade-off some of these diaries are clearly the source material for essays he’s written, so we do get to see that side of the process.

We learn and hear far more about the odd jobs he picks up when scraping by in life. He does a lot of labour intensive work in the early years, often picking fruit, renovating houses in some way, and moving furniture around. Though at times dreary, as a developing writer myself I find it optimistic to see one of such acclaim and success as Sedaris toiling away with such work in his mid to late 20s.

It’s a very interesting read, and his prose is still strong thanks to refinement and his talent as a writer and observer, but I still found myself having trouble getting through it. Reading a lot at once wasn’t particularly gripping. By the author’s own admission in the introduction, cover to cover is not the way he imagines people reading it. I found I needed to read a lot of entries to build up context and understanding, however, so that approach wouldn’t have worked for me. Jumping to points without build up feels too non sequitur, but reading front to back is a bit laborious. There may be a happy medium for others, but I did not quite find it.

Theft by Finding is great as a well-written curiosity and unique approach to autobiography. You won’t get what you usually do from one of his books, but it’s a valuable insight into the life of a great writer nonetheless. It’s a bit of a surreal experience too, when reading a lot of it over a shorter period of time. We know much is left out, but you nevertheless catch a lot of the important developments and hardships unfolding in a life, the years falling away as the pages turn. It was rather poignant, making me think about the course of my own life as I realized the 80s in the book had long passed and I’m already reading about his life in 1995. Life may be the longest thing you ever do, but time still flies alarmingly by sometimes.

One thought on “Book Review – Theft by Finding by David Sedaris”