‘Look after the dead’, said the priests, ‘and the dead will look after you.’

Wise words in all probability, but a tall order when, like Teppic, you have just become the pharaoh of a small and penniless country rather earlier than expected, and your treasury is unlikely to stretch to the building of a monumental pyramid to honour your dead father.

He’d had the best education money could buy of course, but unfortunately the syllabus at the Assassin’s Guild in Ankh-Morpork did not cover running a kingdom and basic financial acumen… 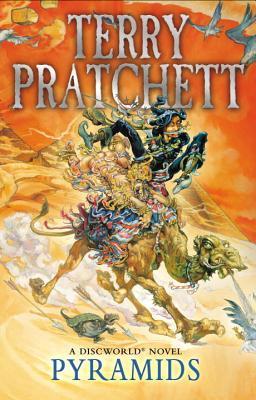 Pyramids by Terry Pratchett is the seventh novel in his comic Fantasy series Discworld, telling a standalone story this time around. It takes place in the old kingdom of Djelibeybi (jelly-baby), which is based on the cultures and mythology of Ancient Egypt. In my progress through the series, this book was admittedly one I wasn’t particularly looking forward to. There are only a few books in this massive series that are actually standalone tales, involving characters who will not, as far as I know, be appearing in any meaningful way again. Regardless of this, I was pleasantly surprised with this novel.

I’ve said it before, and I’ll no doubt say it again, there are elements in Pratchett’s Discworld novels that do become a tad repetitive, and this book doesn’t quite escape that. In this case our protagonist Teppic is to blame, our assassin turned Pharaoh, who feels a lot like a Pratchett-styled stock main character. Though he’s more skilled than some previous leading men, he’s still awkward and insecure in ways that feel a little too familiar. I did, however, like his status of stranger in a familiar land. A lot of his formative years were spent in Ankh-Morpork, getting a rather detailed education from the Assassins’ Guild, so his return home from a more open and ever-changing society is jarring to say the least.

This return home to the Old Kingdom, resulting in a rather typical calamitous situation our hero must find a way to reverse, also reveals deeper elements that made the story much more substantive than I anticipated. Using ancient Egyptian mythology — and some touches of ancient Greek philosophy — Pratchett plays with societies’ obsessions with tradition and religion, as well as the effects belief has on people and the roles they inhabit. This is highlighted by the fact that while there is an antagonistic character, there isn’t really an individual villain that Teppic must face to save his kingdom. The traditions and beliefs of this society, enforced so adamantly and taken too far, are what turns the kingdom on its head. The people are forced to literally confront their beliefs, and only in overcoming this are they capable of moving forward and bringing about change.

The supporting cast was particularly interesting in this book, focusing on a number of parties that don’t interact with one another that much, but all have importance. There are the pyramid builders Ptaclusp and his two sons, Ptaclusp IIa and Ptaclusp IIb, as well as the master embalmer, Dil, and his apprentice, Gern. Each party adds some extra comic relief as they frantically try to deal with the demands from on high, but each are also tied to the physical embodiments of the kingdom’s grip on the past. While others demonstrate a figurative anchor to the old ways, the pyramids (and the mummies they’re built for) contribute to the literal one. It is through the builders that we learn the workings of pyramids on the Discworld, which plays with the idea of “Pyramid power,” as well as the thoughts of the dead on being mummified, since the recently deceased king is tied to his corpse and watches the embalmers at their work. These different angles to the story allow for a richer approach to the situation at hand, and also help illustrate that there is more to it than a hero stopping a crisis.

All in all, Pyramids was a fine entry in to the Discworld. From appearances, much of the series has its legs thanks to the numerous sub-series within, but it’s nice to see that a standalone novel can be as strong as this. It’s also worth noting that while I’m reading the whole series in order, by no means are they written in a way that you’d have to. This could be your first, or even only Discworld novel, and I don’t think that you’d be lost. Though steeped in mythological parody, at its heart is a rather good story about identity, for the person and the place, and learning how to move on from what you’ve always known and become something new.

One thought on “Book Review – Pyramids by Terry Pratchett”