Under the streets of London there’s a place most people could never even dream of. A city of monsters and saints, murderers and angels, knights in armour and pale girls in black velvet. This is the city of the people who have fallen between the cracks.

Richard Mayhew, a young businessman, is going to find out more than enough about this other London. A single act of kindness catapults him out of his workday existence and into a world that is at once eerily familiar and utterly bizarre. And a strange destiny awaits him down here, beneath his native city: neverwhere. 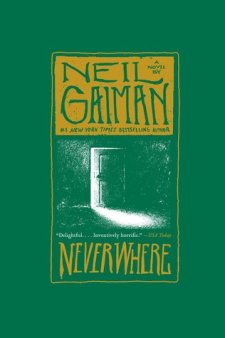 Neverwhere by Neil Gaiman is a 1996 urban fantasy novel, and the companion novelization of a BBC television series of the same name, also written by Gaiman. This was a book I purchased amongst a stack of others by the author, already being a big fan of his work. As a result, however, I actually knew very little about it. I didn’t even know it was a TV series until I started this review, though clearly the book has overshadowed it. It was a rather unique experience for me to go into a popular book by a beloved author while having virtually no idea what to expect.

The tale is an odyssey in the most classical sense. Richard Mayhew, our hapless hero, saves a young woman’s life one night after a day of things not going his way, shirking a dinner obligation with his fiancée in the process. His good deed does not go unpunished however, as his involvement with this woman — Lady Door, who can magically open any door or create doorways — leads to him metaphysically falling into her world of the London Below, making him all but invisible to and forgotten by the London he calls home. Such as it is, Richard’s story is one of a desire to return home, and to do that he must navigate this strange world and assist Door in solving the mystery of her family’s murder.

London Below has many strange and intriguing places, capturing the imagination in both fanciful and horrific ways, depending on where Richard’s journey takes him. The geography of the place itself felt nebulous and hard to place in my mind, which feels both intentional and accidental. The reason for the latter is a lot of the different locales are situated in or around actual London landmarks and stations of the London Underground, which I feel at a loss for since I have never been there. I get a sense I’m missing out on something other readers are not, but all the same I do like this greater sense of obscurity to the Below that it creates, which aids the feeling that this is not a different world entirely, but one hidden in plain sight, behind locked doors, and between the cracks.

Even social hierarchies, as well as powerful figures and their relationships are only hinted at. We meet a few of these people as they assist with the characters on their journey, but the true depth of their power and influence is only glimpsed at. Along with these denizens we have strange and eldritch presences, a threat to all who reside in the Below. I like that while there is a fairy-tale quality to the whimsical characters and this hidden, more magical world, there are horrors lurking in the gaps and dark places of this dank and dreary city too. Whenever they’re brought up it is matter-of-fact. No explanation as to how or why, simply that they are there and one must be careful.

While Richard as a hapless and good-intentioned protagonist feels a lot like a stock character, I enjoyed the arc that he, by all accounts, is forced to go through. He matures in a lot of ways, changing distinctly from who he was at the start, and earns the ability to make a big decision for himself in a satisfying way, especially considering how much his fate is at the mercy of others in the beginning and throughout the course of the story. My favourite part of his arc was his figurative Descent to the Underworld, where briefly the veneer of fantasy is removed and a more grim reality that this novel otherwise plays with takes centre stage.

I liked the entire ensemble as well, whether it be ambiguous yet charismatic Marquis de Carabas, the stoic and fearsome Hunter, or the tenacious Door, each was compelling and complex in their own ways. I especially loved Mr. Croup and Mr. Vandemar, however, the pursuant pair that first wounded Door and menace the group on their journey. They were both deliciously evil in characterization and legitimately threatening, making them a lot of fun as antagonists. Though I will not spoil who it is, I thought the penultimate villain was great too. Things were kept nice and simple, ultimately, but with great implications and consequences.

Neverwhere is a great novel, and while a number of other works by Gaiman still hold the top spots in my esteem, I like it a lot more than I expected I would. The more I think about the ending, particularly, the more satisfied I am by it, both in the way the characters come to it and the obscurity that remains. Knowing that a sequel is apparently in the works excites me, though I wonder if it will be connected by more than just a shared world. I highly recommend the novel, to fans of fantasy or otherwise.

One thought on “Book Review – Neverwhere by Neil Gaiman”