Thor is imprisoned on the other side of the universe and finds himself in a race against time to get back to Asgard to stop Ragnarok, the destruction of his homeworld and the end of Asgardian civilization, at the hands of an all-powerful new threat, the ruthless Hela.

Thor: Ragnarok is the 17th film in the Marvel Cinematic Universe (MCU) and the third Thor film. Released November 3, 2017 and directed by Taika Waititi, the film stars Chris Hemsworth as Thor, Tom Hiddleston as Loki, and Cate Blanchett as Hela. I’m fairly certain an MCU film has never failed to capture my interest so far, but there was something particular about the direction Ragnarok seemed to going in that held me a little more. Though typically a more fantastical Avenger, with funny moments thanks to him often being a fish out of water, Thor had usually been a rather self-serious character before now. With this sequel they were definitely going for a more swashbuckling tone, which had me optimistic, but with the baggage of two prior films I wondered how things would work out.

While nearly all MCU films have a comedic edge to them, this was the first Thor film that felt like an outright comedy in terms of genre. There’s plenty of superhero action as well, but humour was particularly embedded in the fabric of this movie. For the most part it really worked, though at times I could see gags coming. Hemsworth seems to have a knack for making Thor funny, which felt natural for the character. I really got the sense that Thor’s time on Earth, and away from Asgard in general, allowed the airs of nobility to slough off of him. This was not just evident in his more playful, sometimes oafish behaviour, but also in his attitude toward other characters, particularly Loki. He’d noticeably grown in a lot of ways too, coming across as more mature in a carefree sort of way, still confident and competitive in terms of his abilities, yet less prideful. While there wasn’t a seamless progression considering all of the films, it still managed to feel organic to me. 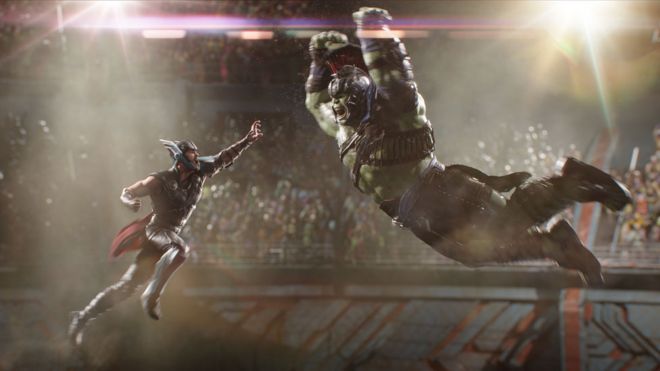 The greater story was concerned with defeating Hela, who was trying to take over Asgard and command its armies to begin conquering more worlds. When trying to stop her from initially reaching Asgard, Thor and Loki crash landed and became trapped on a far away garbage planet called Sakaar, ruled by the Grandmaster (Jeff Goldblum). The Grandmaster hosted a gladiatorial Contest of Champions, which Thor was forced to compete in. There he befriended the rock-like Korg (Taika Waititi), met a wayward Valkyrie (Tessa Thompson), and reunited with the Hulk (Mark Ruffalo). It was while they were on Sakaar, with its bizarre characters and trashy cityscape, that the story was at its best. Everything and everybody there had so much character and weirdness to them that made the film feel distinct. I’m not unsatisfied with the story as it plays out on Sakaar — there was a great fight between Thor and Hulk, the latter got some moments to be an actual character, and Valkyrie had a good arc in her own right from being more antagonistic to heroic — yet I wish it had been a little more substantial, especially since the Grandmaster became more of an afterthought.

Hela was a good villain thanks to Blanchett’s wonderful scene-chewing performance, as well as her formidability as an adversary; they did a good job of making her more powerful than any of Thor’s previous villains. Despite all this, however, she was rather bland as far as plot was concerned. All she really wanted was to rule Asgard and conquer more worlds with her undead army, a villainous goal to be sure, but hardly unique in a cinematic universe with now 17 films. This made our heroes’ inevitable return to Asgard for the third act a little disappointing after all the otherworldly strangeness of Sakaar. Something that did redeem this for me was the lengths our heroes had to go to in order to thwart her, which helped to end things on a much more interesting note. We also got to watch the Hulk fight a giant wolf, which from a visual standpoint was simply a lot of fun. Nevertheless, my previously mentioned problems still stand.

Thor: Ragnarok is not without its issues, but regarding Thor as a character I think it is his best film. He has never had as much personality as he did here, and it was great to see the people behind one of his movies joyously embrace the weirdness of it all in a bigger way. I make the specification about Thor’s character because I know Loki has a big following, and while I do not feel he was underused here, he is noticeably less important to the story that unfolds. If you go to see it for him, you may be more disappointed than I was. Regardless, it is definitely worth checking out.