I’m still in the middle of Smoke & Mirrors by Neil Gaiman, with just about 100 pages left to go. This is the first time I’ve really gotten into any of his short fiction outside of comic books, and I’m enjoying it a lot. I have such pleasant mental associations with Gaiman as a public figure that I often forget how dark and messed up his fiction can get, especially, as it turns out, his short fiction. It really goes to show how much range he has as a writer too. I’m a fan of his, and yet even I feel like I haven’t been giving him enough credit. I’ll hopefully have this book finished and reviewed later this week.

Since last week I’ve only read Batman/The Flash: The Button Deluxe Edition written by Joshua Williamson and Tom King and illustrated by Jason Fabok and Howard Porter. It was the last comic book I wanted to make sure I read before started Doomsday Clock, which admittedly I still haven’t gotten around to. It was an enjoyable enough story, though even as someone who doesn’t regularly read any DC Comics titles I could see this book could have been skipped. I don’t regret reading it, regardless. 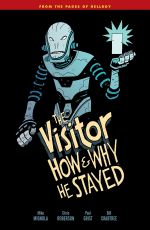 I still plan to read Starship Troopers by Robert A. Heinlein, though it’s more than likely I won’t have a review up for it until the new year. As far as comic books are concerned, I want get through some digital Hellboy volumes, by Mike Mignola and various, that I’ve gotten over the last few months: The Midnight Circus, Into the Silent Sea, and The Visitor: How and Why He Stayed. The last one is of particular interest to me, as it promises insight into a character that, if memory serves, first appeared in volume five of the main series. He and his peoples’ oversight over Hellboy’s life was left largely obscure.