So another year has come and gone, and with it a great number of books have passed before my eyes. Once again I would like to present my top five books of 2017. These are not books that came out this year, nor are they in any particular order. These are just five books that I read this year that I find the most notable.

The Dark Tower by Stephen King 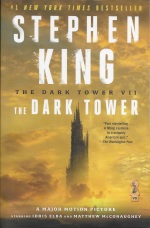 The Dark Tower series is one that I’ve really enjoyed reading over the years, but I was excitedly wary of the final entry. Endings can be tricky, and I wasn’t sure if the conclusion to this saga of novels would be satisfying or not. I was wonderstruck to find that the final novel was not just utterly captivating, but also my favourite one. It was funny, exhilarating, frightening, and downright heartbreaking. It didn’t avoid being messy in spots, but that did nothing to hurt its impact on me. I’m not sure I’ve ever been happier with the conclusion of a long series.

The Catcher in the Rye by J. D. Salinger

I’m honestly surprised this book has even made it on to the list. I didn’t particularly like it; the juvenile writing style, while authentic, could be grating to read, and Holden was frequently an aggravating character. Despite this, the book moved me deeply. Holden Caulfield is a young man going through a severe depressive episode, and the dawning realization of this while reading it had a great effect on me. It is so seriously apparent to me that I bemoan every Goodreads reviewer that complains that he just needs to “get it together.” He’s suffering in a world that doesn’t want to or know how to help him, and it’s absolutely tragic.

Over the last year I’ve gone from a casual reader of the Hellboy series to an outright  Hellboy fan. What surprised me most about delving deeper into all this series has to offer is how good the prose work turned out to be. I felt dubious about the transition from comic book medium to printed word, but those feelings were clearly unfounded. Odd Jobs was a spectacular collection that held me throughout, very few tales distinctly worse than any others — an especially surprising thing for an anthology. The book managed to stay true to the character and series’ world while also granting new and intriguing insight made possible by the change in medium.

This was a book I had been eager to get to the second it got on my radar, and I am so pleased with how much it didn’t disappoint. A story filled with otherworldly forces, alien creatures, ghosts, and primordial power, the real horror is the racism the characters are subjected to living in Jim Crow America. The cast of characters itself was wonderful and enduring too, nearly every member of the two closely knit families getting their own tale, while at the same time serving a narrative that spans the entire novel. I’m also in love with the cover design, which not only looks pulpy but is also textured to look and feel like a worn old book. It was a great blend of horror and historical fiction.

Homesick for Another World by Ottessa Moshfegh

This short story collection admittedly caught my eye because of its retro sci-fi cover, which I knew had nothing literal to do with the book. I’m glad it caught my eye, however, as its stories have still stayed with me all year. Of all the books on this list, I finished this one the earliest. The characters, scenarios, even settings vary significantly throughout, but all are joined by a central theme expressed in the title; these people find themselves in varying states of unhappiness with their situations in life. Sometimes funny, tragic, creepy, and/or even infuriating, these stories captured something poignant about being human, often showing us pivotal moments where these characters could shift into a change, but leaving us on that to wonder if they will.