45 Master Characters will make your characters and their stories more compelling, complex and original than ever before.

You’ll explore the most common male and female archetypes–the mythic, cross-cultural models from which all characters originate–and learn how to use them as foundations for your own unique characters. Examples culled from literature, television and film illustrate how memorable and effective these archetypes can be–from “Gladiators” and “Kings” like Rocky Balboa and Captain Ahab to “Amazons” and “Maidens” like Xena and Guinevere.

The mythic journeys of heroes and heroines–the progression of events upon which each archetype’s character arc develops–are also examined. Building such a “journey” into your character’s story will enable you to stop worrying about what happens next and get on with telling your tale. 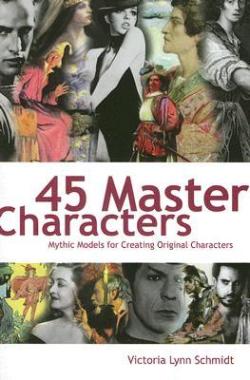 Like many other books, I’ve been meaning to 45 Master Characters for quite some time. I’ve owned it for a number of years, but my current drive to push my story ideas beyond my thoughts and into words (still slow going) inspired me to finally read it cover to cover. The book largely explores character archetypes, which it defines as the foundation that characters stand upon; a blueprint for the writer to build from that preserves their creative spark. The idea of discovering my characters within this book’s frameworks always seemed like a great way to understand them even more, as well as maybe point out contradictions that I hadn’t noticed to correct flaws in design.

The book divides archetypes by sex, starting with female. Each has eight different archetypes, headed by a classical deity that embodies the core ideas of that archetype, which is then split into heroic and villainous interpretations. For example, the archetype represented by the goddess Demeter is The Nurturer or the Overcontrolling Mother. Each represents two sides of the same coin. Each chapter is respectably thorough in exploring its archetype, and follow a familiar framework each time that makes it easier to refer back to if need be. Later chapters go on to cover the importance of supporting characters, the different roles they can fill, and finally the feminine journey and masculine journeys are laid out in detail. There are handy worksheets in the Appendix as well that one could use to plot out their own stories within these frameworks.

Something important to remember, which I struggled to keep in mind myself, is that what this book lays out is not word of law. I found this to be especially important to keep in mind the archetype chapters. These archetypes as laid out are ultimately supposed to be foundations only, so while Schmidt does get rather specific when detailing them as characters I made sure to see them not as requirements but as fine-tuned examples. I had a subconscious desire to be told what to do, which is contrary to the point. Much of the legwork for building up a character is still left up to the reader. For example, during my reading I realized that while a lot of well-known warrior women characters fall under the archetype of the Amazon, that does not mean other female characters are not allowed to be athletic or combative. To think this way would be to rely too much on what the book says at face value. An archetype speaks more about an underlining attitude the character has, not necessarily what they can or can’t do.

Furthermore, the values and fears listed are not checklists that must all be met, but a pool the reader can pull from or play with. Don’t feel as if you must make sure your character must tow these lines either. Schmidt does a rather good job of repeatedly emphasizing that a story is meant to challenge and/or change the core aspects of these characters over its course. As a small criticism, however, I do feel she could have done a better job emphasizing that the archetypes are much more flexible than her examples may be making them sound. I won’t fault her for expecting critical thinking from her readers, but at the same time they are coming to this book for instruction and reference, so it might have helped to show how varied interpretations could be. There are a few cases where she cements a certain concept as inherent to an archetype, and while I don’t disagree that it’s important, I’m more curious to know how a writer might redefine it.

Another shortcoming I found was how dated some of the references could be when bringing up examples of an archetype “in action.” While there were plenty of obvious ones like Luke Skywalker or Wonder Woman, as well as other characters from popular series or films, I did find that a number of others I had to take the author’s word on. As for the use of Ancient Greek deities (as well as Isis and Osiris) to represent the archetypes themselves I found her usage of them to be nearly perfect. When looking into what others thought of the book I found some people complaining that they were too Eurocentric. While that is the case, I won’t fault the book for it simply because the Greek gods have been such a fixation in Western thought for over a century that for the intended audience they (for the most part) easily evoke what their respective archetype is meant to be, in a way that Mesopotamian or even Norse pantheons could not.

Though perhaps not as useful to writers looking to break certain molds or think far outside the box, I found 45 Master Characters to be a fantastic writing reference book that got me thinking more deeply about my own characters and story in ways that I hadn’t before. Where things were not clear for me, I really have been able to more firmly cement ideas, see where they need to begin, as well as what works, what doesn’t, and why. I found the book’s particular focus on female characters and the feminine journey especially valuable, particularly its lesson that a journey being “feminine” or “masculine” does not limit it to one sex only. While not the only reference guide out there, and certainly not a required rule book, it is nonetheless a valuable resource for those looking for more guidance. There is also a revised edition of this book (which is not the one reviewed here) that may address some of the shortcomings I brought up.