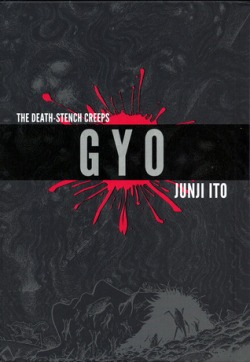 Something is rotten in Okinawa… The floating smell of death hangs over the island. What is it? A strange, legged fish appears on the scene… So begins Tadashi and Kaori’s spiral into the horror and stench of the sea.

Gyo is a horror manga series by renowned writer and artist Junji Ito. It was originally published serially in the weekly manga magazine Big Comic Spirits from 2001 to 2002, before being collected into two volumes that were released the same year. The edition I’m reviewing is an English deluxe edition published in 2015, collecting the entire story into one hardcover along with two bonus short stories. It had been a while since I read any of the Ito books I’d picked up this year and it was nice to read one of his longer works again.

The story follows Tadashi and his girlfriend Kaori, who are on vacation in Okinawa. Following a strange encounter with a fast-moving object while scuba diving near a shipwreck, the pair are menaced by an odorous fish that walks on land with bizarre crab-like legs. Tadashi seemingly manages to kill it, but their troubles are not over. Kaori becomes almost haunted by the stench of death that the fish exuded, while more and more sea life begins emerging onto the shore; from fish big and small, to octopuses, to great white sharks.

Sea life coming onto land upon creepy, spindly legs was about as much as I knew about this story going in, and frankly I was not prepared for how astonishingly weird it got. I think it bears experiencing firsthand, so I will be sparse on the details to preserve its twists and turns. What surprised me most was that it didn’t end up being of supernatural origin—at least not explicitly. While I’m sure that information will inspire some ideas, I can almost guarantee that it’s not what you think.

When thinking about it too closely it becomes easy to poke holes in a lot of what develops, but how these things came to be is less important than the results of this aquatic invasion how the characters try to deal with it. The flaws could be a little distracting at points nonetheless, but it never got bad enough to turn me off of reading it.

The body horror of this story is exceptional. While it begins with vividly detailed sea creatures skittering about where they shouldn’t, the situation soon degrades into ghastly body horror as what altered the fish begins affecting things on land. It’s not simply the imagery the reader is presented with either, but also coming to understand what is happening to those affected. Ito had a specifically bizarre idea in mind for what is happening to bodies in this story that walks the line between horrific and silly in a way that helps to make it especially disturbing. 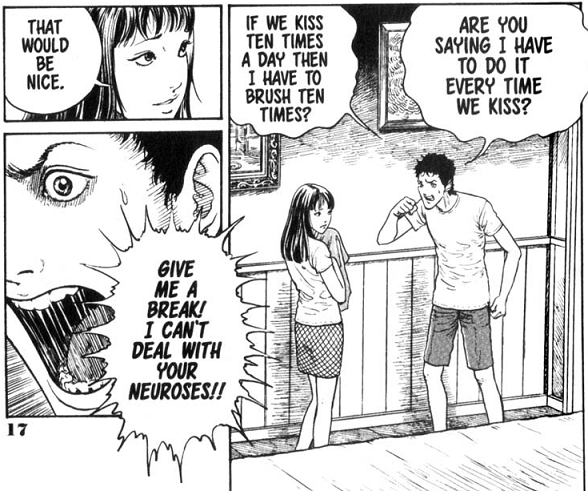 The relationship between Tadashi and Kaori was a fairly interesting aspect of the story as well, being a little more complex than others featured in Ito’s works. Kaori has a sensitive nose and seems to be a germophobe, both factors making the invasion of fish especially disturbing for her. Along with these conditions, she’s got a bit of a selfishly needy streak to her, frequently putting pressure on Tadashi to fix problems that are bigger than he can realistically handle. He does get frustrated with her behaviour at times, but I enjoyed how ultimately dedicated he was to her well-being. She was clearly dealing with some degree of mental health issues and even in a crisis he continually tries his best to help her as much as he can.

I would be remiss if I did not mention “The Enigma of Amigara Fault” as well, which is the longer of the two short stories at the end of the book. After an earthquake a fault line shifts the earth in the mountains, revealing numerous human-shaped holes running deep into the stone. Strangely, people begin to notice holes that resemble them perfectly and feel an unusual compulsion to climb in, disappearing into the earth. This is easily one of my most favourite of Ito’s stories, with an unsettling premise that picks at the brain and a superb closing image. 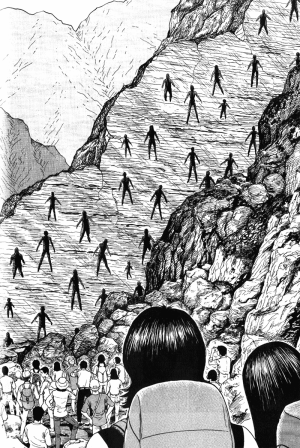 Gyo is at times a little far-fetched, but ultimately a good horror story that depicts some fantastic body horror and a premise far more strange than I expected. It helps to think of it like a monster movie that goes off the rails into some demented places, rather than expecting more cerebral horror. The art is fantastic as always and is sure to give most readers the absolute creeps, if it doesn’t gross them out entirely. The stories at the end are good too, the first short and a little humorous, and the second a great example of how well his stories can terrify with an idea rather than horrify with an image. It’s definitely worth giving a read.

One thought on “Comic Book Review – Gyo by Junji Ito”