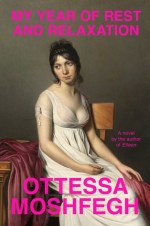 I’ve been reading My Year of Rest and Relaxation by Ottessa Moshfegh, though I’m only just getting started with it. My reading plans took a slight detour. Though I’m still within the first chapter, I have read until the first section break. It was a bit of a whirlwind so far, giving a lot of information on the narrator’s daily life such as it is and her dysfunctional friendship with a college friend named Reza. The style is rather fast paced, though I haven’t exactly gotten a hold on what the story is about yet. I’m a little wary with how much I’m being told rather than shown, but that may just be Meshfegh setting the scene. I’m still optimistic.

Over the weekend I finished reading Moving Pictures by Terry Pratchett! Please check out my review here. I enjoyed it well enough, though it went pretty much as I expected it to. Though it hasn’t been the case every time, there is a general skeleton of a story that Pratchett seems to use when he has more of an idea he wants to explore than a specific story he wants to tell. Gaspode the Wonder Dog did not entirely take over the role of protagonist, but he was one of the most complex characters in the story, torn between his resentment for how humans mistreat him and his innate nature as a dog (a Good Boy). I was thrilled to learn that he becomes a recurring character throughout the series.

I also read The Ashes of Jedha by Kieron Gillen et al, which has caught me up on all of the available volumes of the current Star Wars series by Marvel. This is the first book with Gillen taking over from Jason Aaron and the difference was a little staggering. Maybe I just prefer something about Gillen’s style, but I was vastly more intrigued with the story here than I was with most of Aaron’s stuff. There was some weird stuff with the Force in it, which is always a win for me, but the book was mostly about a Rebel operation yet it still had me hooked. It bodes well for me for the series going forward.

Though this is not a completed book, I also read “The Shadow over Innsmouth” by H. P. Lovecraft from my massive tome of his stories. I’ve been playing the video game Bloodborne recently and a friend of mine told me to read this—basically a homework assignment—before I begin a specific portion of the game. I enjoyed it quite a bit, though I had absorbed more about it through osmosis than I realized, since much of it didn’t surprise me. I will likely have a review up of it soon.

I know I gab a lot about Star Wars, but I’ve got a list with five of the newer novels still on it that I want to get to this year. So, it’s high time I started the first Aftermath novel by Chuck Wendig, which is following the Galactic Civil war after the deaths of the Emperor and Darth Vader. I’ve been wanting to read this trilogy for a long time and I’m not putting it off any longer (once I’ve finished up with Moshfegh’s novel).