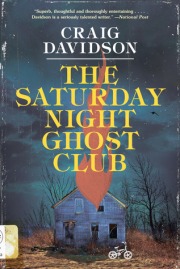 Last night I started reading The Saturday Night Ghost Club by Craig Davidson, a favourite Canadian author of mine. It wasn’t long ago that I first heard about this new book of his and after having picked it up on Boxing Day I decided to get started on it now. I’m only about 30 pages in, but I feel I’ve gotten a good introduction of the characters and setting thus far, though I’m sure more groundwork will still be laid. So far it’s playing a lot with the role of memory in our lives, as well as the narrator’s childhood belief in monsters and urban legends, the latter of which I relate to to a certain extent. I’m excited to see where things go, but wary of what the early examples of extreme bullying forebodes for the characters. I don’t dislike it, it’s just having its intended effect on me.

Over the weekend I started and finished I, Robot by Isaac Asimov, a collection of science fiction short stories centred around the author’s famous Three Laws of Robotics. Sometimes older science fiction is a little dated but this was a breezier read than expected. Asimov’s view of robots, AI, and their integration into human society is far more optimistic than most, so these stories centre more around social issues related to robots and/or the performative hiccups with the Three Laws. It was fun to read more optimistic science fiction that still maintained some darker undertones. The interplay between humans and robots is a lot more subtle, the conflicts more philosophical or psychological. I should have a review up by Friday.

Having just started The Saturday Night Ghost Club I really have no idea what I’m going to read next. I suppose it ought to be a graphic novel, but I cannot decide what that will be just yet. I am waiting for the next volume of Berserk that I ordered to arrive in store, but I don’t want to just wait for that. I’m in a bit of limbo as far as series go. Some have languished so long I have no urgency to continue them right now, and others I really ought to start. I guess we’ll see what I decide when next Wednesday rolls around.