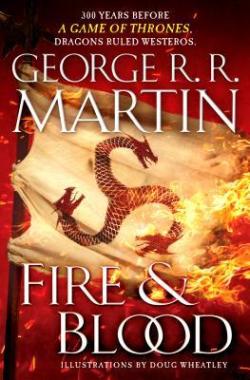 Set in the world of the Song of Ice and Fire series, Fire & Blood by George R. R. Martin is volume one of a history of House Targaryen’s reign over Westeros, including over 75 black-and-white illustrations by Dough Wheatley. Set about 300 years before the first novel, A Game of Thrones, it begins with Aegon I the Conqueror and concludes after the end of the Regency of Aegon III. This book is uniquely set apart from the main novel series because it is written as a historical text from that literary universe, rather than the narrative form fans of the series are accustomed to. As such we see this history through the lens of Archmaester Gyldayn, about whom we know little as a person, yet he serves as a passive in-universe perspective who offers academic commentary and brief tangents when appropriate. END_OF_DOCUMENT_TOKEN_TO_BE_REPLACED