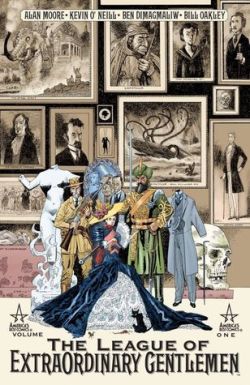 In this first volume of The League of Extraordinary Gentlemen writer Alan Moore and artist Kevin O’Neill introduce a reimagined Victorian England of 1898, a world wherein characters and events from Western literature of that period and into the 20th century exist. The titular League is formed by Mina Murray, corresponding with MI5 agent Campion Bond (007’s ancestor), who brings together a menagerie of people with exceptional powers and abilities to help combat threats to Britain. After being assembled, their first task is to recover cavorite, a remarkable material with anti-gravity capabilities, that has been stolen by Chinese crime lord The Doctor for his own nefarious purposes.

On its surface, this book is fairly standard fare for a team book. A good chunk of the story is about bringing these extraordinary people together and convincing them to cooperate with one another. Once assembled, they perform their mission quite well, find out there was more to what was going on than they knew, and ultimately embark upon taking down the true threat that was really pulling the strings. It’s a tale as old as time. I don’t mean this to knock it, mind you. As a way to introduce the reader to this universe it does an exceptional job of weaving literary references through its characters and story, while also hiding a plethora of Easter eggs as well.

This is the second time I’ve read this book and though I’m much more well-read than the first time around I still wasn’t entirely aware just how ambitiously Moore packed this story with literary references. The main cast of characters are all from fairly well-known pieces of Western literature, but settings they visit and even random names dropped for background characters are in fact literary references, some I could deduce on my own and others I’d never even heard of. The longer I spent reading it the longer I realized how far Moore had gone, in subtle ways, to realize a world where the events of conceivably all Western literature of the time had actually happened. While the story may be fairly standard, I think the worldbuilding is stellar. A lot of ludicrously imaginative things take place in Victorian literature, especially in the adventure and proto-science fiction genres, making their world both recognizable and distinctly separate from our reality.

It is in faithfully capturing the Western literature of this period that I think the book might hit a snag for some people, specifically in the depiction of other races. Fu Manchu is heavily featured in this book (referred to as “The Doctor” due to copyright issues) and the way he and his henchmen are depicted distinctly reflects the “Yellow Peril” origins that first inspired the character. I get the sense that the choices made by Moore and O’Neill here are contextual—that they wanted to represent both the good and the bad aspects of this literature faithfully—so I don’t personally take issue with it, but that doesn’t stop some of the representation from just being negative representation regardless of intent.

In many cases the authors go out of their way to make the book appear out of the Victorian era, in ways I’d never noticed before. Narrative boxes at the end of each issue talk up each chapter as if they’re pieces of authentic serial adventure fiction written just for boys, and most amusingly the back cover has a Victorian era bio for both Moore and O’Neill that are hilariously ludicrous. O’Neill apparently draws while in a comatose state thanks to alcohol abuse and a rough boxing match, and Moore is a former circus exhibit.

As a team, I think the characters in this book are balanced really well, with Mina being the foundation that holds it all up. While sexism of the time is a barrier she must constantly deal with, I love how strong-willed she is in leading all these individualistic men, who all come around in their own way. I especially liked Jekyll and Hyde’s characterizations, the former being rather milquetoast compared to the others but apt at being the voice of reason when things get heated, and the latter being degrees of monstrous throughout the story, but at the same time can be reasoned with and relied upon in a pinch. Whether or not Hyde will remain so is uncertain, but I hope his arc continues on a more heroic path.

While the story may not have blown me away, I think the worldbuilding in this book is excellent, merging innumerable pieces of literature into a living, breathing world that is both recognizable and fantastical. O’Neill’s art is wonderfully expressive and evocative as well, often doing a great job of showing what a character is thinking and feeling without aid of words. Included as an extra is a piece of prose with illustrations as well that tells a more Lovecraftian story, crossing even more characters together, that I really enjoyed as well. The more problematic elements of crafting a faithful world of Victorian literature may understandably turn some readers off, but I think the book is a great start to a world I can’t to explore further. The setup for the follow-up story, teased throughout and at the end, already has me excited.