I have started The Seven Deaths of Evelyn Hardcastle by Stuart Turton, though honestly I’ve barely scratched to surface. I wanted to have read more, but during my prime reading time over the weekend I was frankly too exhausted to have gotten properly into the meat of it. As such I’m only 19 pages in, but even these have not been what I was expecting. It begins in medias res with a character realizing he has amnesia while in the middle of a pursuit in the forest, too late to stop the presumed murder of a woman he believes is named Anna. He has found his way back to the mansion he was staying at, which is soon to be host of a ball, but nobody there knows who this Anna is. I’m pretty well hooked, though for now it’s just a burning desire to learn what’s going on.

Over the weekend I did manage to push myself to finish Who’s a Good Boy? by Joseph Fink and Jeffrey Cranor, despite the exhaustion I already mentioned. Had I not been so, I would have finished it faster and read more Seven Deaths, but here we are. Just as with the third volume it was great to revisit these stories again, especially some of the more dramatic moments that took place during this story arc. The creators plant the seeds for different story lines a lot earlier than I’d noticed or given them credit for before, which was an especially prominent takeaway with this volume. I still do feel something is missing without Cecil’s performance though. His soothing baritone is easy to miss. 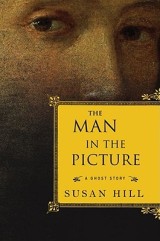 Throwing a bit of a curve ball with what I’m reading next since it’s a little off script as far as my scrappy reading list goes. I was at the library last week to pick up some DVDs and decided to browse the horror section a little bit. While I was there The Man in the Picture by Susan Hill caught my eye. I haven’t read any of her work, but I do know she also wrote The Woman in Black. The synopsis grabbed me enough, and it’s less than 200 pages long, so I decided to take this little detour and make good on reading more library books. To give a summary I’m sure is reductive, it’s about an evil painting.