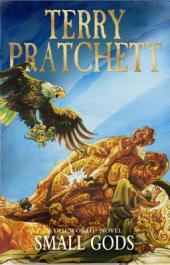 I’m a fair amount further into Small Gods by Terry Pratchett and much of the story has clicked into place for me since last week. I’m increasingly seeing how Pratchett and Neil Gaiman are cut from the same cloth, this book also dealing with gods and their dependence on human belief to sustain themselves. I really like how he’s tackling religion in this book, specifically rampant dogmatism. It’s lampooning a very clear parallel to a belief system in our world, without being irreverent to the idea of faith itself. So far it works more to show the ways institutions can become abusive and corrupt. I’m really looking forward to seeing how this plays out. The story feels like a departure from tried and true formulas he’s used before. 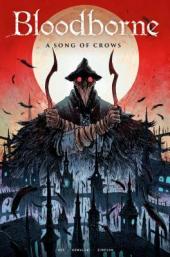 Over the weekend I read the third volume in the Bloodborne comic book series: A Song of Crows by Aleš Kot, Piotr Kowalski, and Brad Simpson. It’s the first to feature one of the characters from the game as a protagonist; Eileen the Crow. The team for this series did not disappoint, despite what one might expect from a comic book tie-in telling the backstory for a side character. The narrative was honestly—and I don’t say this lightly—a bit more 𝔀𝓮𝓲𝓻𝓭 than its predecessors. Not incomprehensible, but Kot and company once again captured the dreamlike/nightmarish nature of Yharnam perfectly. It was so unexpectedly bizarre and vague I feel I need to read it again before I review it. I’m totally here for the weird, mind, so I’m happy to give it a second look. 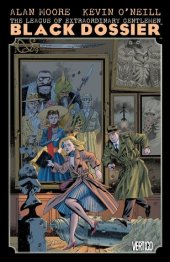 I still have every intention of reading Coraline by Neil Gaiman soon, but on the comic book front I’ve recently gotten the next couple of volumes of The League of Extraordinary Gentlemen that I needed. So, I’d like to start The Black Dossier by Alan Moore and Kevin O’Neill soon. Technically it’s volume 2.5 and knowing what I do about where things go I’m curious as to how it will bridge volumes two and three. If it fills in a lot of the detail from that almanac I struggled through at the end of volume two I’m honestly not sure how I’ll feel about that.