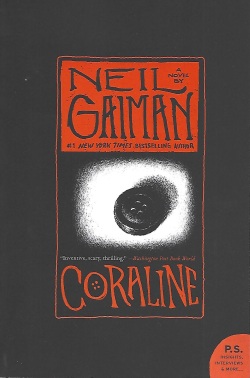 Coraline is a 2002 horror fantasy novel by Neil Gaiman. Coraline, the titular character, and her parents have moved into a new flat in a big old house that is divided into several apartments. They share the property with some colourful characters; two aged actresses below them and an eccentric old man above them. There is a vacant flat next to theirs that is unoccupied, the passageway in their place bricked up behind a door in their parlour. Listless and left by her busy parents to try and entertain herself in the waning days of summer, Coraline can’t help feeling oddly fixated on this door, even though her mother has already shown her what’s on the other side. Reopening it on her own, she finds a long dark corridor where there ought to bricks. The passage leads her to a world that mirrors her own, full of wondrous delights and populated by another mother and father with buttons for eyes, who soon turn out to be far more malevolent than she first realizes.

In the same vein the author’s novel The Graveyard Book, which I read first but came out several years after this one, Coraline is a suitable for all ages. You wouldn’t be at fault for mistaking it for a children’s novel—in many ways it is—but it is written in such a way that young adults to full on grown-ups will likely find something to delight in while reading it. It’s a book that artfully rides the line of creating compelling, creepy horror without being so disturbing and/or graphic that it would be considered unsuitable for younger readers. As a horror fan from an early age I have a soft spot for work that fills this niche, and this book is pretty much a quintessential example of such a thing.

The story works both as a fairy tale and an inversion of a typical portal fantasy story. Travelling through the door, she is at first captivated by the place and its wonders, but there’s a consistent undertone of menace to it all. The contrast works really well. What at first seems magical and whimsical—having an Other Mother who will try to satisfy your every desire and make you happy—is really a figurative spider’s web for something much worse. This book excelled at expressing macabre ideas and images while still leaving a lot of it to the reader’s imagination. Sometimes it is being made to imagine a formless thing morphing and coming after her, while at others it’s the more implied threats that the world and the Other Mother represent. Many more details, like where exactly this otherworld came from, are left deliciously vague too.

Coraline as a character is quite wonderfully realized. The writing conveyed a great sense of being in her head, without being too limited by a first-person narration. I always had a good sense of what she was feeling and thinking. She’s very clever, but never in a way that lessened the fact that she is still a kid. She’s resourceful, adventurous, and capable of getting herself out of harrowing situations, yet she’s still immature and fixated on more simple gratification at first. It created a perfect balance where I could sympathize with her situation and how that led her to danger, but also wanted to see her grow out of certain mindsets and change from her experiences. I really liked how adult perspectives were implied as well. I understand her boredom and frustration with her parents, as I’m sure young readers would as well, but I could also see her parents’ point of view.

This review feels a little light to me, but Coraline is short and sweet. All killer, no filler, as they say. I don’t feel there’s much I need to carry on about. One could argue the book could explore things with some more depth, but as an all-ages book that seems unnecessary to me. The main character feels like a living, breathing person and the otherworld she ventures into is wonderfully nightmarish and dreamlike at the same time. The Other Mother worked great as a more straightforward source of evil too, being tempting and loving in her own twisted way, yet unfair and horribly dangerous. It’s a creepy fairy tale suitable to crawl under anybody’s skin.