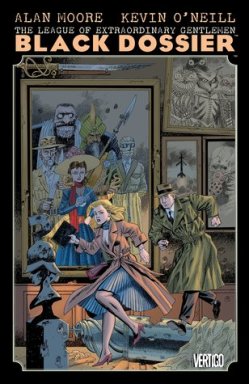 The League of Extraordinary Gentlemen: Black Dossier by Alan Moore and Kevin O’Neill is a unique volume in the series, serving as a bridge between volumes two and three. Far removed from the late Victorian era of the previous volumes, this book takes place in England in the 1950s. The government of Big Brother had been in control of the country following the Second World War, but has since been ousted and the country is in a state of transition. Mina Murray and Allan Quatermain, inexplicably young after all the years since we last saw them, sneak into their old headquarters to steal the titular Black Dossier in order to discern what military intelligence knows about their activities. With it secured they must flee the country, MI6 agents in hot pursuit.

How jarring the beginning of this book is depends entirely upon whether or not you have read the extensive Traveler’s Almanac at the end of volume two, a rather dense section of prose that outlines areas of interest across the series’ globe. In it some of Mina and Allan’s adventures in the early 20th century are conveyed to the reader, which explains how they come to appear as they do in this book. This is ultimately why I’ve explicitly stated whom the pair gracing the cover are; it’s not really a spoiler and the book doesn’t treat it as a secret either. Nevertheless, I can’t blame some people for having chosen to skip the almanac and I get the sense this book exists, in part, for the sake of those very people.

There are two facets of this book that it alternates between, the actual narrative in graphic novel form and the contents of the black dossier itself. We are brought to each new section as Mina and Allan get to them, which they can only do during downtime, so they are conveniently split up throughout the book. The narrative portions help to build out the world, but are fairly straightforward plot-wise. The art is densely packed with details and references to dissect, and the story involves a lot of cloak-and-dagger spy stuff that I suspect is deliberately convoluted, but otherwise Mina and Allan are simply trying to make their way to a rendezvous point while Jimmy Bond (yes, that one) and his cohorts try to apprehend them.

I continue to be in awe at just how many literary references Moore manages to pack into this world without it bursting at its seams. In many ways this book showcases the series’ transition into the middle of the 20th century, focusing on the spy and science fiction genres of the 50s. The former seemed the most prominent, with Bond being the most famous and obvious reference, while many of the others I was admittedly unfamiliar with. I found the way Bond was presented to be the most interesting, as he is made to be less of a suave, irresistible, super-spy and more of a self-important, duplicitous, sex pest who is just competent at his job. Moore warps him only slightly from the more heroic way he is popularly imagined, and it made for a compelling villain. He is great at dissolving the veneer from these characters, when he chooses, presenting them in a way that is less idealized, but perhaps in some ways more honest.

While I feel the comic book portion has helped to set some of the stage for the story moving into volume three, the most important sections of this book are the dossier. Much of it is prose, though fortunately not as densely written as in volume two, while the rest is rather multi-media. This really helped to keep things interesting by varying up the tone, writing style, and presentation of the material. One section reads more like a report, while another is written as a folio from a lost Shakespeare play. Others are correspondence on the back of postcards and sections cut out from pulp magazines with more simplistic comic book stylings. One prose section I could not parse at all, until I came across advice telling me to read it aloud, which changed everything.

All of the dossier works to drip feed information about the world, giving a deeper look into its history and setting the stage for where things are going, though where that is I’m not sure I could say just yet. We learn more specific information about previous iterations of the League and what became of them, greater detail on the adventures of Mina’s group after the Martian invasion, and more detailed context for the history of this world before the series started. I found reading the almanac a little excruciating, so I was pleasantly surprised to find these sections so much more palatable.

The League of Extraordinary Gentlemen: Black Dossier feels more like a pit stop in the series, rather than a proper sequel, but I really appreciate how much it was able to re-contextualize the world in such a concise way. It plays with format and writing style so often that it always keeps the experience interesting too. Case in point, the final pages of the graphic novel have 3D effects layered over them and a pair of 3D glasses is provided to properly view them. As much as I’m ready for volume three to be a more straightforward graphic novel again, I’m very on board for all the weird ideas Moore has to bring into the series.