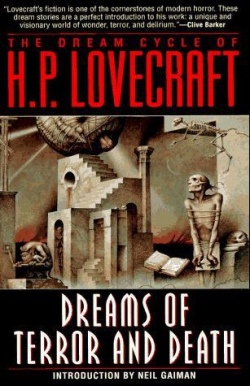 The Dream Cycle of H. P. Lovecraft: Dreams of Terror and Death is a collection of short stories and novellas from the author’s “Dream Cycle,” which is a series of stories that explore the idea of alternate worlds accessible to humans through dreaming. Though treated as a distinct cycle of stories here, it is made evident in the text that these tales exist within the same narrative universe as the Cthulhu Mythos that Lovecraft is better known for. While a number of the stories are fairly self-contained with unique protagonists, a number of settings recur throughout. The most important recurring character is Randolph Carter, a young man more adept at exploring the realm of dreams than the average person.

The first 100 pages of the book are front-loaded with a lot of especially short stories, many of them ultimately serving to lay the groundwork for a bigger tale that rests in the middle of the collection. They typically explore the different, often terrifying, ways dreamlands and the beings that inhabit them can interact with reality, sometimes slipping in of their own accord and more often through human meddling. Though not initially made clear, many tales are situated within the dreamlands themselves, having many rather mundane, even benevolent denizens of their own.

There were a few stand-outs among these early stories, such as “The Doom that Came to Sarnath,” telling the history of a great city in the dreamlands, founded on blood, and how it meets its end, or “Celephaïs” about a man desperately trying to rediscover a beautiful city he once visited in the dreamlands, to the detriment of his physical body in the waking world. “The Nameless City” I quite enjoyed as well, though I found the ending confusing. A man seeks a dizzyingly ancient city that most refuse to speak of, uncovering evidence of a great inhuman civilization that once thrived on Earth. This last story is one that ties the cycle more directly with the Cthulhu Mythos, taking place in the waking world and mentioning Sarnath only in passing as its connection.

I quite liked a lot of these for their ideas, even the more forgettable among them, though unfortunately Lovecraft’s penchant for things being “too horrible to describe” is overused to the point of tedium. I’m all for leaving the mind to wonder at the horror of something hard to even imagine, but you’ve got to give me something. To be fair, in many cases—usually the longer stories—he does present enough to leave a lasting impression, but other times I can’t even tell if a character’s horror is from beholding a place, a thing, or an idea. It’s far too abstract at that point. I can experience vague, shapeless, existential dread on my own, thank you very much.

The stand-out story for me was definitely the novella The Dream Quest of Unknown Kadath, which is actually what compelled me to read the Dream Cycle in the first place, a friend of mine having spoken of it often in the past. Other than being peeved by some of its formatting (no chapters or section breaks), I enjoyed reading this story the most. In it, Randolph Carter embarks upon a strange odyssey throughout the dreamlands to locate a dazzling city he once saw on the horizon, before the Great Ones of Earth’s dreamlands—godlike beings—obscured it from him.

This story read the most like fantasy, though peppered throughout are distinct elements of horror. It sees Carter traveling to exotic locales, allying himself with exotic peoples, and dealing with dangerous landscapes, creatures, and entities. I really enjoyed the way this quest developed, with an ending that imparted a surprisingly satisfying theme. This story also reconnects with many of the shorter stories that precede it, simply referencing some while others have their characters and figures return to play further roles in Carter’s story. In many cases I found the shorter stories recontextualized for the better too.

Unfortunately, the book peaks with this story. There are a number of others that follow after it, a few of them continuing Randolph Carter’s story, but none live up to the grandeur of The Dream Quest of Unknown Kadath. Most problematic for me was the longest tale in the collection, the novella The Case of Charles Dexter Ward. It was an eldritch tale more grounded in the waking world, with only passing references to Carter and the realm of dreams, but that’s not the problem I had with it. My problem was how it highlighted Lovecraft’s more self-indulgent qualities as a writer.

Most conspicuous in this story, but a problem throughout the book, was how much he will painstakingly layer details, to the detriment of story flow or progression. The most damning way he does this in this story is that he seemingly could not stop himself from seeding clues for the eventual twist at the end. He’d done it so much that well before I was half way through the story I had figured out where it was all going. Worst yet, I had to read as he lay down more and more clues to what I already knew, with the characters involved bumbling around and wondering at what it could all mean. It’s a real shame, because the story otherwise integrated real-world history in a compelling way and had some legitimately creepy ideas and developments.

That last paragraph bares the ultimate problem I had with this book. Lovecraft has some wonderfully weird and imaginative ideas for cosmic horror, but he wasn’t really that great of a writer. Stories are often meandering, overly-descriptive, and a chore to read longer-form. Those with more patience than me may feel differently, but this all stuck out like a sore thumb to me. I’m not sure I’ve ever been in such an awkward spot with a book before; loving its ideas yet hating the experience of reading it. Those positives are the only reason I rate it as high as I do. I’d be lying if I said there wasn’t a lot of positives I took away from reading this book, but I was elated to be finally done with it.