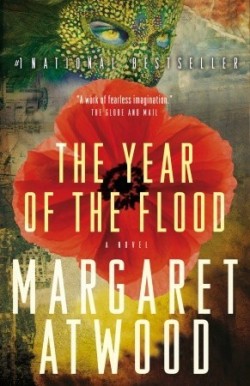 The Year of the Flood by Margaret Atwood is the 2009 sequel to the author’s 2003 novel Oryx and Crake and the second entry in the MaddAddam trilogy. The story is dystopian/post-apocalyptic science fiction set in the not-too-distant future after a global pandemic has wiped out much of humanity. The world before the fall was none too ideal either, with greedy corporations controlling nearly everything. Gene splicing and experimentation was rampant, heinous acts were presented for entertainment, and the world was in the midst of a complete ecological collapse. This novel follows two women who have managed to survive the pandemic, jumping between the day-to-day tribulations after “the Flood,” and their shared history with the ecological religious group the Gardeners before human civilization fell to ruin.

Though presented as a sequel to Oryx and Crake, it’s much more of a parallel novel, telling the stories of two perspective characters, Toby and Ren, at roughly the same time as events in the first novel. In keeping with the first novel, the perspective of these survivors after the pandemic is used as a narrative frame. The bulk of the novel’s content takes place before the pandemic, for a while only offering glimpses into the lives of these women as they eke out survival in the ruins of their world.

An interesting note about my experience with this novel is the fact that I read Oryx and Crake over 10 years ago. Apparently, many of the characters given focus in this book, such as Ren and her best friend Amanda, both appeared in that first novel. I have no memory of them. Fortunately, this didn’t really matter. I could remember many of the essential, important points of that novel enough that this book was perfectly accessible. So, while I would recommend starting with the first book, it’s likely you wouldn’t have to, so long as you can accept some peripheral details you don’t have the full context for.

While the first book was concerned with people living in secure, corporate-run communities, this book gets more into what it’s like for those in the lower classes, though not as deeply as I at first thought. Much of Toby’s early backstory has her trying to make her way in this world the best she can, cut off from her more privileged upbringing. It showcases how cutthroat and exploitative these areas can be; more than once we are told how people disappear, their bodies used in food processing or the creation of some type of bio-oil. It isn’t long until she finds herself under the protection of God’s Gardeners, however, an eco-religious group that has a settlement in the lower-class neighborhoods. They cultivate their own food and scavenge materials for other needs, so they’re far from a life of luxury, but their way of life is also rather unique to them.

At first, I was concerned that the story was going to contain far too much misery. Pretty much every institution seemed out to exploit people as much as possible, and Toby’s struggle with sexual abuse at the hands of her boss had me expecting the worst from nearly everybody. It was a world I felt deserved a pandemic. Fortunately, it didn’t take long for things to take a turn for the better. The Gardeners’ views are sincere, for the most part, and as a small community stood as a ray of sunshine in a bleak, destructive world. They weren’t presented too ideally, either, with their own bad apples and questionable practices keeping it balanced. I really enjoyed the differing perspectives each character offered on the group: Ren as a child learning their traditions and Toby an adult outsider brought into the fold, at first just trying do her part and eventually to fit into the role of an authority figure.

Atwood did an excellent job of giving each character a distinct voice. For much of the story Ren has a more childlike, naïve view of the world and the adults around her, though she does mature, while Toby is a much more hardened person. Fairly detached from one another on a personal level for much of the story, I really liked the glimpses into how they are perceived by others, especially in the case of Toby. She is filled with doubts and feels hypocritical as a member of the Gardeners’ community, having come to live with them for protection rather than out of faith. Ren, however, sees her as a very wizened figure and more untouchable among the adults; few of their antics get past her.

Though both were compelling in their own ways, I definitely preferred Toby as a perspective character. She’s very smart and capable, but plagued with doubts and insecurities that she must manage. Her job as the resident beekeeper was a great example of this. The previous keeper, who taught her, insisted that she must speak to the bees, emphasizing a spiritual bond. Toby is skeptical of the spirituality, but obliges these practices without complaint. Eventually, such things become almost second-nature to her, and it happens so gradually that the progression from a character who feels ridiculous doing it to someone still self-conscious yet somehow sagely felt perfectly natural.

As the stories of the past converged with the present, things began to feel more grounded in the moment. Other survivors, making themselves known, became malicious forces that Toby and Ren must contend with. There’s a lot of depraved violence in this book, and the characters at the centre of these acts became a severe threat. It made for a thrillingly tense climax to the whole story, as the possibility of such a confrontation was slowly seeded throughout the novel. I felt most spurred to read as much as possible as the book drew towards its conclusion.

Separated from the excitement of the climax and conclusion, however, I’ve found some details nagging at me. The number of survivors who that are closely related to each other in some way is so uncanny it’s a little bothersome. I can infer some reasons why this group of people might have a better chance at surviving, but too much of it came across as far too convenient. The connections between Ren and Toby were fine, despite surviving in unrelated circumstances, but the threads between survivors became too much of a messy web. Maybe this is rectified or explained in MaddAddam in some way, but for now it just nags at me. It just becomes a little far-fetched that so many people died around the globe, but this handful of people are separated from each other survived and met up with one another.

The Year of the Flood was a great return to a fiction world I hadn’t visited for many years. The time melted away and all the familiar little horrors of a corporate controlled, rampant gene-modifying, ecological disaster of a dystopia came flooding back to me. Despite the bleakness, my misgivings were abated by the strong characters and surprisingly affecting spirituality of the Gardeners. I’d still recommend reading Oryx and Crake first. Though this book stands well enough on its own for anyone to check out, it’s an even better follow-up. I stand by my gripes with the uncanny connections between survivors, but not enough to ding the book too harshly.