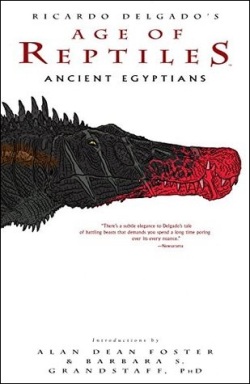 Age of Reptiles: Ancient Egyptians by Ricardo Delgado is the fourth book in the author’s graphic novel series fictionalizing the lives of the great behemoths that once dominated our world: the dinosaurs. Set in the swamps of Cretaceous Africa, a region that would become Egypt millions of years later, the story follows a lone Spinosaurus (Spinosaurus Aegypticus) who wanders into a territory teeming with hungry scavengers, vicious predators, and vindictive herbivores who don’t take being prey without a fight. Serving as a sort of prehistoric anti-hero, the Spinosaurus is a force to be reckoned with and his arrival in the environment brings the conflict between these feuding parties violently to a head.

Like a ronin or gunslinger from classic films, which Delgado intentionally paid homage to, the Spinosaurus arrives in the swampy territory from the surrounding wastes alone, scarred, and fearsome in appearance. He means to cause no trouble, beyond what predators must do to survive, but trouble finds him. Within this territory lives a herd of Paralititan, massive sauropods that are continually harassed by the predatory theropods of the area that often target their young. One bold adult leads the herd in defiance of these predators, chasing them down when they can and stomping them to death. While wary of the Spinosaurus’s size and strength, they nevertheless see him as a threat that cannot be tolerated forever.

I find it a little hard to write this without repeating sentiments from my review of the omnibus, but these things really do bear repeating. The story is elegantly simple in execution. As with Delgado’s previous volumes, this graphic novel is a brilliant exercise in visual storytelling. The work is a pantomime: completely wordless. No characters speak, there is no narrator, nor are there onomatopoeic bubbles to express crashes, growls, and roars. Despite the absence of the written word, this story is packed with detail and personality that perfectly balances more human emotion with the primal qualities of these dinosaurs. They never seem too human, nor even fully sapient, but they are not cold, emotionless beasts either.

The art is lovingly detailed and visceral, sometimes literally, packed with creatures large and small. I love how teeming with life the environment looks; it looks lush and beautiful, yet oppressive and raw. It’s a place you’d love to gaze at but dread to be stuck in. Each page is never distractingly busy, but sometimes even the smallest creatures that crosses paths with the main characters has a little arc to follow. It may just be a brief escape from becoming a meal, only lasting a few panels, ending as a little visual footnote in the margins, but it makes the world feel all the more alive.

While the dinosaurs’ facial expressions are accentuated, I love how much I believe the characters are just animals being animals. This is not just in their more brutal actions necessary for survival, but their more nuanced emotions and interpersonal conflicts too. It gives credence to the fact that animals, while not as cognitively complex as humans, do nevertheless experience the world as individual beings. They learn, they struggle, and they want to live the best that they can. This book illustrates this (no pun intended) in a beautifully succinct way for me, perhaps making it easier to accept without question because we already have to use our imaginations when considering dinosaurs as living things.

Age of Reptiles: Ancient Egyptians is a beautiful graphic novel. The plot is not complex, yet appreciably straightforward and naturalistic, with a sprinkling of classically familiar tropes, and I wouldn’t have it any other way. It’s worth checking out for anyone with an interest in the prehistoric, wildlife, or just visual storytelling. As a more explicit warning, since dinosaurs do have a broad appeal, it does get quite violent, so use your own discretion.