I’m only a chapter or two further along with Star Wars: The Rise of Skywalker by Rae Carson. I’ve definitely got to pick up the pace. Story is getting moving a bit, but still in its early phase. Also, a small detail spoken by Lando has expanded on something I had assumed from the film, which is nice. 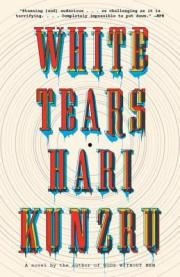 I’m only about 60 pages into White Tears by Hari Kunzru, which is a little disappointing. It’s been a scatter-brained few days, so I didn’t get as much reading done as I wanted to. I am enjoying the book so far, though. The writing style is fairly unique, using dialogue sparsely and presenting the story in a more detached way, thanks to the perspective character. Anomalous media is a really fun concept to me, so I love the ghostly recordings that Seth, the main character, doesn’t remember recording while walking through New York City with his hidden mic. It feels as if the story is only just building itself up, though, so I don’t have a clear sense of where this is going or what it’s more specifically about yet.

Despite my lack of progress with my other books on the go, I did manage push myself to read through a comic book volume; last night I read through Star Wars: Rebels and Rogues by Greg Pak et al. This is Pak’s first volume with this series, but it was easily one of the best. The core cast is split up three ways to do their own mission for the Rebellion, yet I was invested in each of them pretty equally. The only standout was Chewbacca and C-3PO getting to do their own mission together, wherein they have to place explosives on an unstable planetoid, lure in some Star Destroyers, then blow the planet and take out the ships. Problem is, the seemingly uninhabited planet is actually populated by rock people, adding a perfect moral quandary to their mission.

This is still anybody’s guess, except for the fact that I’ll likely read more Star Wars comics. Don’t know if I’ll continue reading Doctor Aphra volumes, or if I’ll start the Age of Republic book, though. Either way, I’m too early on in White Tears to have another novel lined up in my mind.