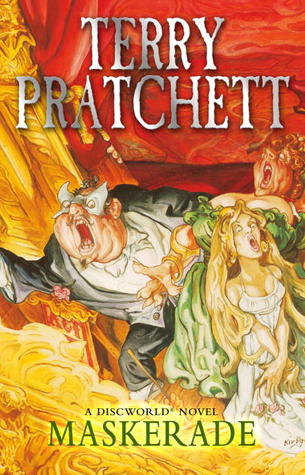 Maskerade by Terry Pratchett is the 18th novel in the author’s comic fantasy Discworld series and the fifth in the “Witches” subseries. Agnes Nitt, a young woman from Lancre in the Ramtop Mountains, has made her way to the bustling city of Ankh-Morpork in order to seek her fortune. Though possessed of an untrained talent for witchcraft, she has an especially gifted singing voice and is determined to see how far it can take her, auditioning at the city’s Opera House. It’s a chaotic world of melodrama and vanity, where the show must go on, even with a Ghost lurking about and murders piling up. Only the meddling of the Lancre witches, Granny Weatherwax and Nanny Ogg, can challenge this nonsensical world and unmask the Ghost before everything comes crashing down.

In my reviews of the books in this series I often bring up how many of them share a similar structure to each other, about extra-dimensional forces or magical anomalies that threaten the Disc. They’re never bad, but can come off as rote the more of them I read. Early into this book, I was pleased to learn that this one would be different. It tells an appreciably smaller-scale story, contained largely within the Opera House itself. The building took on mystifying, labyrinthine qualities while I was reading, populated as it is by the auditorium itself, offices, kitchens, dining rooms, living quarters, ballet studios, backstage areas, and a mess of secret passageways. Along with the nameless droves of people working there at all levels, they felt collectively like the Opera as a character itself, its people prone to swooning, feeding into fantasy, and absolutely committed to upholding all manner of clichés.

This book managed to feel like both a standalone and a part of a series, which was great. Agnes Nitt first appeared in the previous Witches book, Lords and Ladies, and her frustrations with the Lancre witches carry on into this one. Granny and Nanny, for their part, are feeling the absence of Magrat from their little trio, and both in their own way feel Agnes should fill her role. A coven really ought to have three, after all: the maiden, the mother, and the crone. Together they serve as an ensemble cast, with Agnes giving us a closer look at the behind-the-scenes of the Opera House, while Granny and Nanny try to infiltrate it, to apprehend the Ghost and unmask him.

Nanny Ogg sometimes feels like a bit of a sidekick in these novels, so I was really pleased that she had a more active role in this story. It’s not that she’s usually passive, just that Granny Weatherwax has such a strong, self-assured personality that she comes off as more in charge. I got a greater sense of Nanny using her own unique talents in situations Granny would be less equipped to deal with. The two have always been strong characters in these books, but I love to see Pratchett continue to build them out and make them even more vivid.

Though Granny Weatherwax is her typical stubborn, steely, forcefully-helpful self, there’s also a new tinge of wanderlust to her character, with just a smidge of open-mindedness to how others want to do things. She never really has an arc, as she’s a flat character (in that she influences those around her more than she changes herself), but it was pleasing to see how the events of previous books have subtly changed her. This was most apparent in how she regards Agnes, whom Nanny more urgently desires to join their coven to restore a sense of order. Granny is simply confident that Agnes becoming a witch is a foregone conclusion, but without any goading on her part, remarking that Agnes will do so when she is ready.

For a while I was wary of the way the text was treating Agnes, on account of her weight. Frankly put, she’s fat, and early on it poked fun at that a lot. This would’ve gotten old fast, but they diminished quickly enough. Though humorously presented, it was much more about how the world sees her than anything else. Despite the continued gag commentary that she has a “lovely personality” to deflect from the matter of her weight, her character was in fact very endearing and easy to sympathize with. She’s often the most sensible person among the Opera group and deserves more recognition her talents than she gets. The most amusing thing about her was her alter ego, Perdita, who is the edgy, outspoken, and mysterious version of herself she wishes to be. Though more of a background detail, it captured teenage struggle for identity really well. I look forward to seeing her appear in further books.

As you might have been able to guess from the last few paragraphs, the characters were a real strong suit of this novel for me. The story was nonetheless enjoyably refreshing, lampooning opera in general as well as The Phantom of the Opera, which I’ve regrettably never read or seen firsthand. This story and clichés of the opera are ubiquitous enough, however, that I had no trouble enjoying the setting and antics. I’m sure there are some deeper references that passed me by, but I was never left scratching my head about them. With the witches having dealt with stage plays before, I was afraid this might retread old ground, but it was quickly apparent that opera is a beast all its own.

What unfolds in the story line itself is a murder mystery that had me wildly speculating at what might actually be going on, as the actions of the Ghost are often counter-intuitive. At one moment he is causing “accidents” and destroying musical instruments, only to later leave instructions for how the production should be organized. My suspicions were close, in a way, but I’d somehow fooled myself into believing a real ghost was involved in the mix. Granny would be so disappointed. Everything fit together quite beautifully in the end, with exciting chases and reveals aplenty, giving a drama truly fit for the opera. It goes to captivating lengths to explore how those engrossed in a dramatic art can have the lines between art and reality blur for them too, which I loved.

Maskerade was a great continuation of the Witches subseries, feeling in some ways like a new dawn for the characters. I don’t really have any complaints. It was refreshing yet familiar as a Discworld novel, with characters old and new each having many moments to shine. Pretty much every little story thread was important to the plot too, while still indulging in somewhat tangential or eccentric larks along the way. It may not be ideal as your first foray into the (sub)series, but I highly recommend it regardless.

One thought on “Book Review – Maskerade by Terry Pratchett”