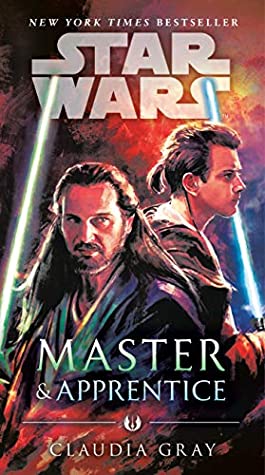 Star Wars: Master & Apprentice is a standalone novel by Claudia Gray, set in the new canon of Star Wars. Set several years before Star Wars Episode I: The Phantom Menace, the story follows Master Qui-Gon Jinn and his 17-year-old Padawan apprentice Obi-Wan Kenobi at a crossroads in their relationship. Though they’ve been partnered for some time, they are at odds with one another, Qui-Gon a maverick who often disregards the inflexibility of the Jedi Council and Obi-Wan more rigid and committed to following the Jedi Code to the letter.

Their partnership is put at risk of ending altogether, however, after the Council extends an unexpected invitation for Qui-Gon to join them, meaning he can no longer keep an apprentice. He takes some time to think it over, fearing he will fail Obi-Wan as a teacher if he leaves him, yet wondering if another master may be better suited to teaching him. Despite so much uncertainty between the two, they embark upon what may be their final mission together, after an old friend reaches out to Qui-Gon for help.

This novel was a bit of a slow burn for me at the outset, and part of this had to do with the groundwork Gray needed to lay to reintroduce me to these characters. I have a fondness for Qui-Gon and young Kenobi as they are presented in The Phantom Menace, for better or worse, but that film certainly didn’t do them any favours in terms of characterization. Though it took some time, I really appreciated the way she fleshed out the two here, both as individuals and the ways she expanded on their relationship as teacher and student.

Kenobi is assertive and eager to prove himself, insecure about his apparent incompatibility with Qui-Gon, yet also opinionated and rebellious, freely speaking his mind whenever he doesn’t see eye-to-eye with his master. For a character who has gotten a lot of attention in his mature, more capable years, I really enjoyed a deeper look into his mind as a more uncertain, green youth.

The central figure in the novel, I liked Qui-Gon’s perspective all the more, as his presence in the franchise is otherwise short-lived. Gray did a good job of developing how he clashes with the Council, his good nature and strong intuition often seeking solutions that don’t agree with their rigid deference to the rules and Republic protocol. Internally, a great balance was struck between presenting him as a figure of authority and someone more modest, willing to self-reflect and consider his own mistakes. This especially comes into play as he begins having visions of the future, rekindling his old interest in the ancient Jedi prophecies, a taboo subject for its tendency to spark a desire to control the future through knowledge.

Though not quite integral to the actual plot of the book, it was great to see a more detailed look at what the Jedi Temple was like for masters and their apprentices as a place of learning, particularly during peacetime. Oddly, what it’s like learning to be a Jedi in this more traditional way is hardly touched upon in the films, but here we get a better understanding of what their training is like, how a learner’s respective talents can be nurtured, and just how different their training can be depending on who their master is.

The story itself was the biggest surprise of all, as it is a great example of a Star Wars side story centralized to a specific location. In this case it is the planet Pijal, which is under the regency of Jedi Rael Averross, an old friend of Jinn’s. Though populated by a civilization of human beings, their culture was made compellingly distinct from other places in the franchise. We don’t get too in the weeds with all levels of their society, but learn enough for it to stand out on its own. The galaxy is a big place, after all, and I love when specific locations like this are zeroed-in on and given such attention.

Concerning the brewing conflict, the coronation of the world’s young princess Fanry is soon at hand, which will cement the creation of treaty allowing for the planet to make legal agreements with offworlders and open a hyperspace corridor to their planet, making them less isolated. A group of terrorists called the Opposition is staunchly against this new deal, however, which highly benefits the shady Czerka Corporation, which routinely enslaves people, while the people on Pijal’s moon are underrepresented. Jinn and Kenobi are tasked with rooting them out, so that the coronation can proceed as planned.

What captivated me most about this story was that Star Wars plotlines are rarely so politically nuanced, typically following a more simple black and white morality. The situation on Pijal turns out to be a lot less simple than “terrorists bad”, with our Jedi duo trying to discover who is behind the violent attacks, which turns out to be an unknown third party, while also learning that the treaty the Opposition are protesting is indeed problematic and needs changing. This puts Jinn at odds with the terrorists, the Monarchy, and his own apprentice, as he is determined to neutralize the threat but also refuses to act as a representative of the Republic for the coronation.

It was great to see political tensions represented so complexly, as the Czerka Corporation does not simply shift into place as the villains either, ultimately building to a twist I legitimately didn’t see coming during the climax and necessitating action on many fronts. Having found all of this so compelling, I was a little let down by how neatly everything wraps up by the end. The series of events leading to this conclusion worked well enough, but I would have appreciated more consequences and so much baggage and interpersonal tension was built up during the story that suddenly felt dropped. There was tension between Qui-Gon and Rael, for example, as the latter had become too biased toward protecting Fanry over doing right by the people, which fizzled out instead of resolving with more impact.

What might make Master & Apprentice most appealing is its narrative links to the main Star Wars films are largely tenuous, drawing points of connection the most casual of fans can appreciate and otherwise telling its own self-contained story within the franchise’s universe, with character familiar and new. New supporting characters were endearing and helped give voice to the enslaved peoples in the periphery of the story too, though they were ultimately more of an afterthought to me in the face of all else going on. After the twist, the story concludes a little too fast and neatly for my tastes, but this only mildly detracts from how absorbed I was by the characters, conflict, and world the novel built up. A great entry for lovers of the expanded media and newer readers alike.