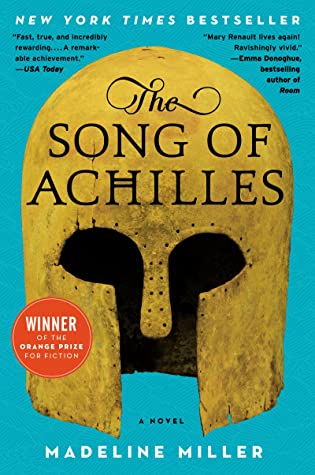 The Song of Achilles by Madeline Miller is the author’s first novel, retelling the life of the ancient Greek hero Achilles and the events of The Iliad by Homer. The story is told from the perspective of Patroclus, a Greek prince from a relatively small yet proud kingdom. To his father, the boy is a disappointment: small, slight, and timid. His life with this cruel, unloving father is empty and cold. After accidentally killing another noble boy who tries to take something from him, Patroclus is exiled to the kingdom of Phthia, to be fostered by King Peleus.

Initially ostracized by the other boys for his crime, he attracts the attention of Peleus’s son Achilles, a demigod destined to become the greatest hero of his time, becoming his faithful companion. As the two grow up together and become lovers, however, destiny becomes a portent of doom for any prolonged peace and happiness in their future together. Nevertheless, the call of the greatest campaign in their history becomes too difficult for one such as Achilles to ignore, compelling the two to meet whatever destiny has in store for them on the plains of Troy.

As was the case when I read her novel Circe a couple of years ago, I marvel at Miller’s ability to novelize mythology while preserving a sense of authenticity. The book blurs the line between history and fantasy, depicting real-world kingdoms of old, inhabited by the gods and spiritual forces they believed in. While the events of The Iliad are important to this story, much of the story leading up to it is from numerous other mythological sources. They’re all woven together perfectly here, into a moving tale of gods and mortals, inescapable destiny, and passionate love.

Making Patroclus the perspective character was a good choice, giving the reader a more grounded point-of-view to feel tied to and allowing Achilles’ larger than life qualities to stand out in turn. Achilles is still a mortal, but his status as a demigod makes him naturally exceptional compared to those around him, his personality very human yet slightly out of touch with that of regular people as a result. For his part, Patroclus is no commoner, but compared to the legendary kings and demigods of great strength and/or cunning that he continually rubs shoulders with, he is a fairly average man and a substandard soldier, in fact.

I don’t read romance stories often, so I don’t have a huge knowledge base to compare this book with, but I really enjoyed the romantic component to this story. Though dealing with elements of war, destiny, and coming-of-age, at its core this is a love story between Patroclus and Achilles, and I admired the purity of it. Their transition from companions to lovers had its stumbles and youthful awkwardness, but I liked that the conflict wasn’t ultimately about reciprocation of the relationship itself. The two are utterly enamoured with each other, and what gets in the way is the pesky nature of destiny in Greek mythology.

As is stressed in The Iliad when Zeus laments being unable to save his son Sarpedon, your destined fate is inescapable, though you sometimes get the cursed blessing of knowing some details of what the fates have in store for you. Such is the case for Achilles, who knows he is destined to become the greatest hero of his generation, eventually elaborated that this fame will be won in the Trojan War and that this is a war he won’t survive. So what they find themselves partly at odds with is fate, which is determined to keep their lives from any sort of peaceful happiness.

The other part is Achilles himself, who is actually gifted with the opportunity to avoid the war entirely, but at the cost of his superhuman talents and eventually dying in obscurity. The story could have lingered on this a little longer for me, but I am more than satisfied with the idea that Achilles cannot resist living up to his greatest potential, that his talents are too central to who he is, and that Patroclus doesn’t fight this because he wouldn’t want to see him unfulfilled and diminished. With the cultural values of strength and heroism so prominent around them, it felt justified.

The way Patroclus’ perspective is written is so sincere and loving that it was easy to get swept away by his feelings for Achilles. For the latter’s part, there was something so matter-of-fact about his commitment to Patroclus that felt perfect for one used to being unchallenged. What others think does not matter, Patroclus is who he wants. There is one small thing that nagged at me about their relationship, though, despite how invested I became in it. There are plenty of important moments of intimacy between the two that I felt present for as a reader, but often I felt I was more being told about quieter moments, rather than shown them. Obviously I wouldn’t want the novel to be bloated with such things that don’t move the story forward, but these characters are so central to this novel that I wish I had a better impression of what they’re like together at rest, absorbed in the moment just being together and not concerned with any greater, outside forces.

The cast of supporting characters is well realized as well, especially amongst the other kings and princes at Troy like Odysseus and Agamemnon, but my favourite above all others was Thetis, sea nymph and mother of Achilles. There was a subtle complexity to her character that I found fascinating. Her presence in the story is passively antagonistic, as she hates Patroclus and thinks he is unworthy of her son, yet she does little to physically interfere. More than anything, she seeks to protect her son and preserve any form of immortality he might attain. If not literal godhood, then fame.

Despite being a lesser goddess, I loved how frighteningly inhuman Miller made her out to be, from the perspective of Patroclus, with fully black eyes and a voice like waves crashing against the shore. Though her attitude towards mortals has her mistreating Patroclus, putting me at odds with her, I couldn’t help but sympathize with her plight in this story. The gods coerced Peleus, father of Achilles, to force himself upon her and then married the two. Despite everything, she loves her son deeply, and I can’t really blame her for hating everything around her son that his existence forces her to interact with. Worse yet, he is destined to die young. So much mortality is foisted upon her, she is unlikable yet difficult to hate.

The Song of Achilles is an excellent novel, giving a fantastic retelling of the myths of Achilles and The Iliad by fleshing out the relationship of Achilles and Patroclus into a very compelling love story, my gripes about how some of their relationship is presented notwithstanding. It was so effective, in fact, that despite knowing exactly how certain plot details would unfold, this book got genuine tears out of me when the time came. It is raw and so easy to connect with. It is honestly a great way to learn a lot about the story of the Trojan War too, if reading the source material is too intimidating. There are elements of it that are left out, for the sake of focusing on the central characters, but it is written so faithfully and the rage of Achilles is so central to that story that you will learn a great deal of what it’s all about.