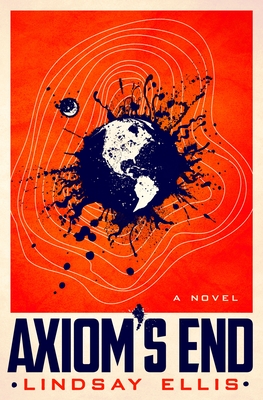 Axiom’s End, the first book in the Noumena series, is the debut novel of author and video essayist Lindsay Ellis. A science fiction tale about first contact, the story is set in an alternate history 2007, shortly after a document known as “The Fremda Memo” has been leaked online, which seems to confirm that the U.S. government has had first contact with extraterrestrials. This leak was only a short while after a supposed UFO crash-landed in California, lending credence to what the document suggests.

Cora Sabino, a hapless college dropout trying to make her way in the world, is the daughter of Nils Ortega, the infamous whistleblower-in-hiding who leaked this world-changing memo. She and her family want nothing more than to sever their ties with Nils, who has routinely put his “transparency advocacy” before his family. His notoriety makes that impossible, however, keeping the eyes of his fans, the media, and the FBI on them all too often. After yet another impact event has people breathing down their necks like never before, Cora’s loose connections to it all bring her face-to-face with a terrifying alien visitor.

Having been a fan of Ellis’s on and off for some time before picking up this  book, I can honestly say that I went in with no particular expectations. I enjoy her insight in her video essays, but there is a big difference between crafting a critique and crafting a narrative, so this purchase was admittedly obligatory, insofar as I was already a fan and wanted to support her debut novel. From the promotion she had done in some of her videos, I had some light impressions on what I might expect, but little did I know just how much I would end up loving this book.

There are two prominent narrative threads to this story, closely woven together. On the one hand, this is a tale of humanity’s first contact with alien life, exploring many of the implications and complications that come with such a revelation. An intriguingly grounded approach is taken to this aspect of the story, as the challenges of trying to relate or even communicate with something truly alien are explored, from human to alien and vice versa. The more character-driven side of the story is the ever-developing dynamic between Cora and Ampersand, the alien (called an “amygdaline”) whom she finds herself in a role as interpreter for.

As a first contact story, I thought Ellis did a great job of reining things in a little, exploring the political blow-back of the initial coverup being exposed and the ensuing circus around trying to deal with Ampersand and what he wants, but keeping things anchored to Cora’s perspective. Other than articles and documents sprinkled throughout the novel, we only ever see things from her perspective, so we only learn what she learns. In the position she finds herself in, that turns out to be a lot, but it kept things appreciably restrained.

For a species whose social hierarchy is not immediately understandable in human terms, as we progressively learn, the reason for the “Fremda group” coming to Earth is appreciably straightforward: they are refugees fleeing genocide, having arrived on Earthy decades before the story’s start and living in a U.S. government facility ever since, where all attempts to communicate had gone unanswered. Ampersand has arrived on Earth much more recently, seeking out the Fremda group in order to help them flee the other amygdalines who are in pursuit and mean to extradite them.

I enjoyed all of the backstory related to the Fremda group’s presence on Earth and all of the expository information on their species, as well as the more philosophical questions posed by the existence of other sapient life and what answers to questions about the universe such an advanced species could provide for us. I especially liked how human advancement was just as much a revelation to them. Their core concern of where to go next, once Ampersand reconnects with them, was a little lacking though, upon reflection.

There was a strong sense of disconnection from their plans, as they don’t explicitly share them with Cora and in turn keep them from the reader too. This did work well with the motif of communication issues between species, but it’s still not quite clear to me why they were waiting for so long before moving on. It was established that it would only be a matter of time until their pursuers caught up with them, so the seeming lack of urgency during the middle portion of the book was at times strange. Wheel-spinning notwithstanding, the story nicely ramps back up once it moves on from this phase.

The real heart of the story is the relationship between Cora and Ampersand, which is where things really shone for me. I really appreciated how gradually their relationship developed, as it was initially exploitative and Ampersand is nothing short of terrifying for Cora. In many ways by happenstance, she’s eventually able to negotiate a partnership with him, acting as his interpreter, getting her in way over her head. It was a nice slow burn from combative, to cooperative, to something more emotionally intimate, that struck a phenomenal chord with me. With this shift still comes a lot of friction, as the story suggests there will always be a barrier of incompatibility between species so different from each other, and Ampersand isn’t always forthright, but this made the positives of their connection very hopeful too.

Ampersand felt very alien, even mechanical as a character throughout, but I found this very effective for one so inhuman, especially at making the eventual moments of warmth from him all the more resonant. I really liked Cora as a protagonist too. Even in her day-to-day life at the onset she struggles to get by, afflicted by a lot of anxiety thanks to her father and his endeavours, but she has a good heart and is determined to do the right thing, even if she struggles with knowing what that is. Her good nature paired well with the fact that she almost always feels overwhelmed by her situation, her anxiety sometimes getting the better of her when faced with government agents who would rather her not be there, or the existential issues that arise from the things she learns from Ampersand.

The only notable negatives I had with the book are, for one, Cora’s anxiety is so consistently present and palpable that I actually found it to be a bit exhausting at times. It never came close to making me fed up with her perspective, but was occasionally a bit much all the same, which is also praise, in a way, because it did feel really genuine. I also kept expecting Cora’s father to become a more meaningful part of the story in some way, but he never did, staying relegated to the background the entire time. With the way everything plays out, it would’ve felt shoehorned in if his role were expanded, but a letter from him early on felt like foreshadowing to me, but it never amounted to anything.

Axiom’s End is not without its issues. The plot drags its feet at times and your mileage may vary with some elements of the story and the unconventional, intimate relationship between Cora and Ampersand. Nevertheless, I heartily recommend this book; the emotional core resonated very strongly with me. It crafts a very serious sci-fi consideration of what truly alien life could be like and the impacts first contact could have on both civilizations, while also telling a more personal story of two beings forming a powerful bond during uncertain times. I’m looking forward to where the story goes in the forthcoming sequel.

One thought on “Book Review – Axiom’s End by Lindsay Ellis”