I was finally able to start reading ‘Salem’s Lot by Stephen King later last week, though I’m only about 50 pages in at the moment. I’m sad that I won’t be finishing it before Halloween, but I expected that possibility already. I’m busier than normal, and in previous years this would often happen anyway. I’m enjoying the book so far, though it’s taking its time at the moment. I didn’t realize there was a “chapter two switcheroo” so to speak, with the prologue taking place after what I can only assume is at least a huge chunk of the story. Though I know what it’s building to already, I’m enjoying the mystique being built around the Marsten House concurrently with the arrival of its mysterious new resident. 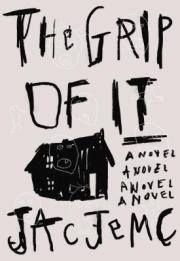 In the middle of last week I finished reading The Grip of It by Jac Jemc, though regretfully I’ve not had the time to finish up a review for it just yet. I’m expecting I will have one up by Friday, just in time for Halloween. With all said and done, I did really enjoy this novel, and a prediction of mine from last week came true. It was specifically that the story would amount to something much more up to interpretation than concrete that came true, which is the lesser of two evils, I suppose. Upon reflection, the ways in which it leaves things up to interpretation are actually quite clever, because you cannot simply reduce everything to the perspective characters being unreliable. It’s a book I would love to have a long, in-person conversation about, but I don’t know anybody who has read it yet.

I also read through the graphic novel adaptation of The Dream-Quest of Unknown Kadath by I.N.J. Culbard, adapting the short story by H.P. Lovecraft. I was right, I did enjoy this story much more visually than I did Lovecraft’s prose, but there is definitely something lost when considered by itself rather than the culmination of a number of Dream Cycle stories. It helps that I’ve read them, of course, but I wish this book had instead been a part of something bigger. This isn’t even the first Lovecraft story to involve Randolph Carter, nor the numerous denizens of the dream lands that he encounters. Still, it is a worthwhile read and far more accessible than his prose, so it’s worth checking out if you’re at all curious about his work.

With all of this consideration for Halloween going on, I actually hadn’t given much thought toward what I want to read next. With autumn still in full swing and myself continuing to be in a horror mood, however, I think I will make good on my old September plans and start reading A Gathering of Ghosts by Karen Maitland next. When this will be is hard to say, since I will probably be reading ‘Salem’s Lot for the next little while, but hopefully I can push for more reading time instead of other leisure activities to pick up the slack. Easier said than done, in practice, but we’ll see.