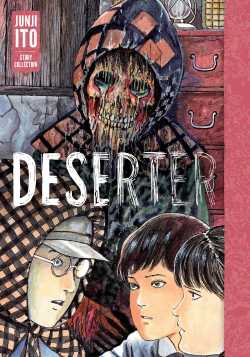 Deserter by Junji Ito is the latest collection of stories by the horror manga author to be published in English by VIZ media. This collection of 12 short stories features some of the author’s earliest works, including a tale of people with appetites for bizarre and unsettling food, another about an army deserter from World War Two who is kept in hiding by a vindictive family for eight years after the end of the war, and a story about a man who refuses to sleep, lest he allow his dreamworld counterpart to take over his body in the real world.

It had been a while since VIZ released a collection like this, just a selection of stories by the author with no plot connections to each other. I’ve mentioned before that I’ve become a little lukewarm on Ito’s work as a whole, while still loving some of his major works. However, when I heard that this collection would feature some of his earliest stories, I found myself getting excited to check out a new book of his once again. The last book that came out was one of his newer works, which I was unfortunately dissatisfied with as I have been with other newer work, but this information about Deserter gave me something to anticipate. This anticipation was not misplaced, as I am happy to report that this was a very solid collection of strange and unsettling tales.

I find that Ito often has a problem with over-explaining some of his stories, but notable in these early works is how he just lets their premises stand for themselves. “Face Thief” is about a teenage girl who can inexplicably change her face to the appearance of whoever she is in proximity of the most, setting her sights on the new girl in class. The story is not concerned with why she can do this, however, nor where she even came from (it is revealed faculty doesn’t even really know who she truly is). Instead, it grapples with the dilemma of having to deal with such a person and whether the retribution doled out by the other students is going too far, punctuated by a perfectly unsettling moment at the end that leaves things in suspense without feeling unresolved.

As a whole, the collection is nice mixed bag, with some stories dealing with more paranormal phenomena and others being more about human derangement. I prefer the supernatural stuff myself, but some of the more grounded elements, such as in “Bullied”, really effectively got under my skin. That story in particular did a great job of being upsetting without depicting violence or frightening imagery; the simple petulant cruelty of the situation and subsequent suggestion of harm in one scene was more than enough to stay with me. Some of the paranormal content did edge into more ridiculous territory, which Ito seems unable to help sometimes, but this was spread out enough in the collection that I did not mind it.

What shows the age of these stories more than anything else is actually the art, which I normally have little to say about in these reviews other than general glowing praise for how great it is. I still enjoyed it just fine, but his line work was a lot more rough around the edges and his penchant for smaller details was absent in some cases. In “Bio House”, a story that involves a table spread of grotesque food, the smaller details looked a lot rougher than what I would normally expect from him, being a lot more vague and roughly filled in than intricate.

I find it easy to recommend Deserter because, as a whole, it is cemented in my mind as a very solid collection. By this, I mean that I wasn’t especially blown away by any one story, but the majority of them were nevertheless great reads that left me very satisfied, with only a few outlying moments. It wouldn’t be a bad place to start, and if you’re hungry for me to read, this shouldn’t disappoint. The book collecting 12 of his earliest stories was a nice, appreciable novelty too that helped this collection stand out to me in the same way as Shiver, which is a best-of collection hand-picked by Ito himself. I would love to see more like this from his early career.