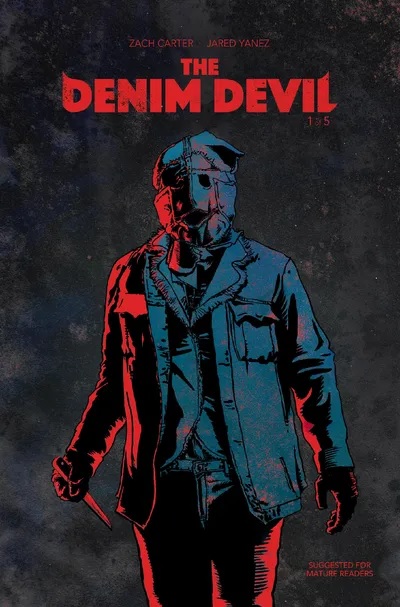 Excerpt from the press release:

Created by Zach Carter and Jared Yanez, the 5-issue series follows the Denim Devil, local nuisance and public embarrassment to Vanglerton, a city under the thumb of the Vangler family’s crumbling denim manufacturing empire. When a gruesome murder is tied to Vangler’s reclusive young CEO, the Denim Devil’s at the bottom of the suspect list—but not for lack of trying!

When the mystery killer’s reign of terror collides with the Denim Devil’s rain of errors, the resulting vortex drags in a motley array of possible suspects and future victims. Who will survive and what will remain of them? What is the deadly secret of Vangler denim? And will the Denim Devil find meaning and mentorship from the mystery killer, or just become more meat for the massacre?

Though there are a number of great examples that come to mind, horror and comedy can be tricky to mash up. Ideally, you would want a scenario where it feels safe to laugh when appropriate, without the threat of the actual horror being completely diffused. Make it too funny, and you’re not scared anymore. Make it too scary, and the jokes feel out of place.

What worked really well for me right off the hop with the character of the Denim Devil himself is that a wonderful balance between these elements is baked into his design. As a figure silently darkening your door, there’s no denying that the man pictured above would invoke some degree of horror in you. On the other hand, this is a man wearing a mask made of jeans calling himself the “Denim Devil”. It may look creepy, but there’s no denying it’s also a really stupid costume. For me, it’s almost perfect harmony between funny and scary, a tone which this first issue tackled very effectively throughout. And frankly, on it’s own, the idea of a would-be slasher killer being a public nuisance that everybody is just irritated by is really funny to me. 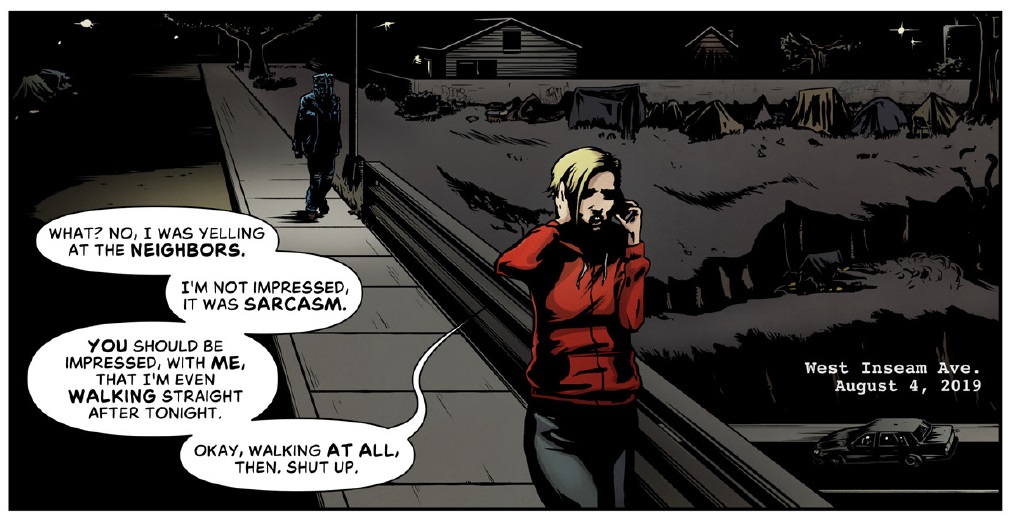 In action, his character worked further in the opening of this issue because he inhabits a lot of the visual staples of a typical slasher killer, silently stalking around corners and sincerely trying to menace his would-be victims, but he is undone by his own incompetence and bad luck. When you think of a funny slasher story, you may imagine the killer behaving in a cartoonishly goofy way or succumbing to slapstick antics, and there is a slight element of those things for sure, but it was more low-key and didn’t feel like it was trying too hard. Like a B horror movie that’s so bad it’s good, the Denim Devil is sincerely trying to be a slasher killer, but he is too incompetent to execute upon his vision properly. I’m very curious of the role he will play as the mystery unfolds.

The title character aside, this first issue wove an intriguing web of characters and mysteries that definitely has me wanting to read more. The angle with the Vangler jeans corporation I find the most intriguing of all, especially with how its departure from that town it once made prosperous has had such negative consequences for the people there. It’s a commonly explored idea in fiction and experience in real life, but it resonates well here so far. How this company connects with the Denim Devil and the real killer is compelling too, as it definitely seems they’re all connected, yet I cannot see how they could possible fit together, though I already have some ideas.

Much of the actual plot of the issue is planting seeds for the rest of this miniseries, so it’s too early to pass judgment on the story just yet, but the style and tone of issue #1 of The Denim Devil have left a great first impression on me, leaving me wanting more. If this all sounds up your alley, I recommend you check it out too.

I would like to thank Zach Carter for sending me a digital copy of this first issue in exchange for my honest opinion. This has in no way impacted my impressions.