Into the Unbounded Night is an upcoming historical fiction novel by Mitchell James Kaplan. Set in the first century Roman Empire, the story follows a myriad of characters from different walks of life and cultures. The most prominent perspective character is Aislin, a young woman native to Albion (Britain) during the Roman conquest of her land, who becomes a refugee as a result. Second to her point of view is Yohanan son of Zakkai, a studious and thoughtful young Judaean man living in Roman-occupied Jerusalem who philosophically struggles with keeping to the traditions of his faith and respecting the institution of the Temple, which seems more concerned with pleasing their Roman overlords. Other characters include a disgraced Roman soldier turned artist, the Roman general Vespasian, and the condemned angel Azazel. END_OF_DOCUMENT_TOKEN_TO_BE_REPLACED

Yesterday I started reading The Long Way to a Small, Angry Planet by Becky Chambers; as of writing I’m about 60 pages in. It’s been a pretty good introduction to the motely crew of the Wayfarer. I’m enjoying it so far, though it has felt like a bit of a lengthy introduction. There’s a decent handful of crew members on the ship the protagonist, Rosemary, is starting her new job on, and Chambers lovingly introduces all of them. One of them is from a reptilian species, which is an immediate plus for me. I love the detail she has put into making a multi-species crew feel diverse in terms of biological needs and capabilities. I understand the need to world-build, and she’s doing a good job, but all the same I’m ready for some forward movement in the plot now.

Monday I finished reading Into the Unbounded Night by Michell James Kaplan, officially finishing my first ARC. I was hoping to have a review up before now, but I took a little longer to finish it than I was expecting, and I wanted some time to ruminate on it too, so I should have one up by the end of the week instead. Nevertheless happy to report that I did enjoy the novel quite a bit. I’ve not had many forays into historical fiction, and this was quite the journey. It made a period of history that felt so distant and abstract to me before now (with the exception of the Roman aspects) feel so much more alive and relatable. There are a few things I have some mixed feelings on, but I will hash them out in greater detail in my review.

With The Long Way to a Small, Angry Planet only just getting started, I’m really not sure what book I’ll pick up next. I still need to shift into a higher gear if I intend to actually finish my personal to-read list to for the year, so I better make up my mind quick. Goodness, I’m probably starting to sound like a broken record. In the meantime, I’m sure there’s a Star Wars comic or two I will read over the next week. Probably the next Doctor Aphra book; I really need to see what that lovable rogue is up to, especially since I’m just now remembering I prematurely read an epilogue to that series in Star Wars: Rogues and Rebels. That needs fixing.

I started Into the Unbounded Night by Mitchell James Kaplan over the weekend, getting 31% into the book. I’m enjoying it so far, and I’m surprised at how widespread and numerous the perspectives are considering it’s less than 300 pages long. They’re fairly diverse too, particularly in terms of religious beliefs, so far following a young woman living in and native to Albion (Britain) during the Roman invasion, a Roman general leading part of the invasion, a Roman soldier disgraced from his Legion, and a Jewish boy in Jerusalem learning to become a priest. I wonder if these stories will only intersect thematically, Roman occupation being a common thread between them so far, or if the characters will all come within proximity of each other by the end.

Last week I just couldn’t resist finishing up the volumes available to me, so before starting to read any new novels I read through The Immortal Hulk: We Believe in Bruce Banner by Al Ewing et al. This volume starts to take a step back from the more cosmic horror and moves toward what Banner and the “Devil” Hulk personality want to do to help change the world. Namely, they declare war on an evil, massive corporation. This corporation, Roxxon, is headed by a literal Minotaur named Dario Agger, who is making for a great scheming, capitalistic villain despite his own hulking appearance. I preferred the horror angle, but I’m still enjoying the stark, often grim, political shift the story has taken. It hits a lot closer to reality, as Hulk is trying to fight against systems that are wreaking havoc on the environment around the globe.

I still intend to start The Long Way to a Small, Angry Planet by Becky Chambers soon, I’ve just decided to keep my focus on Into the Unbounded Night instead of reading them in tandem. That way, I should have Kaplan’s book finished well before next week, if I can keep myself on track.

In terms of graphic novels, I’ll likely dip back into the mountain of Star Wars volumes I’ve still got waiting for me. I might continue on with Doctor Aphra before starting any of the “Age of…” books.

Nothing! I’m currently between books.

Very early on Monday I finished reading Different Seasons by Stephen King. I posted a full review yesterday. While it still took me most of July to read through, I’m happy I was able to get through a nearly 700-page book in about three weeks. That’s pretty fast for me. The last two stories I enjoyed quite a bit. “The Body” was a wonderfully poignant and nostalgic coming-of-age story that seemed more like autobiographical fiction on King’s part that I’d been expecting. The final story, “The Breathing Method”, held the most surprises for me as, unlike the other stories, I had no idea what it was about. One notably fun thing about it was it marked the only other return of a mysterious club in New York where members share stories with each other. This served as a narrative frame in a story in Skeleton Crew, and I was pleasantly surprised to see it again here. 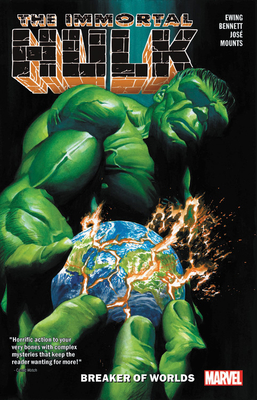 Last night I also read through The Immortal Hulk: Breaker of Worlds by Al Ewing et al, the fifth volume in the series. I continue to love this series and its horrifying interpretation of the Hulk. Over the last few volumes the Hulk has been contending with a shadowy military organization hellbent on putting him down for good, and this volume has it all coming to a head in a way that brings about an end to this phase of the story. Toward the end of the volume Ewing doubles down on some of the literally cosmic horror stuff in a way that’s got me intrigued, though it was initially a little jarring. I’m excited to see where this series goes next, but am also starting to get a sense that the story’s direction may be getting predictable.

I still have every intention of starting Into the Unbounded Night by Mitchell James Kaplan soon, I just wanted a bit of a buffer between books to read The Immortal Hulk. I’ve also decided to start reading The Long Way to a Small, Angry Planet by Becky Chambers, which I’ve been wanting to check out for a while now. Hopefully reading books in tandem works out for me. I’ve come to understand it takes a lot of inspiration from Star Wars, which is always a plus for me. I also just love the tone that the title suggests. Why are the people on this planet so mad? I’ll have to wait and see.

Gosh, I’ve gotten bad at getting these up early, huh? I’m still in the middle of reading Different Seasons by Stephen King. I haven’t made a huge amount of progress over the last little bit, but I did finish reading “Apt Pupil”, the longest novella in the book, so I’ve gotten over a significant hump of the book at least. It ended in a fairly predictable fashion, but goodness was it bleak. I did enjoy it as a thriller, but I suspect it won’t be standing out as my favourite story in this book. There wasn’t a lot of good to balance out the awfulness of the characters and what they get up to. The next story is “The Body”, which the film Stand By Me is based on, so I’m expecting a nice coming-of-age story. It’s so strange that three out of four of these novellas each went on to become a well known movie.

Nothing for this week, I’m afraid. I actually haven’t read all the much over the last five days or so. I’d taken some time off (I work weekends), and apparently extra downtime doesn’t necessarily mean more reading.

I’ve still got a couple of volumes of The Immortal Hulk that need reading, never mind the numerous other graphic novels I could crack open. With some ARCs that I’ve received releasing soon, I should probably start one of them rather soon. So, I will probably be reading Into the Unbounded Night by Mitchell James Kaplan next. I want to be able to get it reviewed for August. I’ll have to start reading books in tandem, which I don’t usually do, if I want to stay on top of my to-read list for the year as well. I’m cautiously hopeful it will all work out.