Over the past couple of weeks I have been replaying the 2013 first-person shooter Bioshock Infinite on the Xbox 360. Though I have many thoughts related to this game that I want to flesh out more before writing about, I have a theory in relation to the world that the developer Irrational Games has created that I want to put out there, for the satisfaction of sharing if nothing else. I have not done any research into other people’s thoughts or official details on these aspects of the story, rather I want to share how I interpreted it myself when I first played it.

This is a more significantly esoteric post than I usually write, so if you haven’t played Bioshock Infinite before it will be difficult to understand what I am talking about. I would provide context, but I feel it can’t really be appreciated unless you’ve experienced the game for yourself.

Dealing heavily in travelling through alternate worlds, as well as space and time, Bioshock Infinite’s story gets a little convoluted very quickly. Our protagonists, Booker (player) and Elizabeth are trying to escape from the city of Columbia, and to do so they are forced to travel through tears, a strange phenomenon occurring in the city that Elizabeth is able to tap into and manipulate in order to alter space/time.

At a couple of key points throughout the story they travel through rather large tears in an attempt to change certain factors in their favour. As they seem to believe at the time, they are travelling from one universe into an entirely new one. There are things that are the same, often referred to in game as “constants” — which must always exist in some form — and “variables” — which are subject to change.

These larger tears that they “travel” through offer dramatically different variables, allowing them to progress forward where they otherwise could not. I always found there to be problems with this idea, however, because there are aspects of this that are in conflict with events across the whole story. It is clear throughout and by the end that Elizabeth can in fact travel to other times and worlds through tears, but what I am talking about specifically are the tears they use when they are trying to fulfill their deal with the Vox Populi to reclaim the First Lady airship.

What I believe, since the protagonists themselves do not entirely understand what they are doing either, is that they are not actually travelling to another world — at least not technically. What I believe Elizabeth is doing is she is using tears to bring variables into the world they’re already inhabiting. Booker and Elizabeth haven’t actually left, but rather altered the state of the world they are in, much in the same way Elizabeth can drag supplies, cover, or machines in through tears. These tears are just so dramatic in scope that introducing them into the world has a far greater effects.

This would help to explain a lot of what we see throughout the game as consequences of opening these large tears. For one, after opening the first tear to reverse the death of Chen Lin, Booker and Elizabeth encounter two guards who are glitchy in appearance and are babbling almost incoherently. Elizabeth remarks that they remember being dead, suggesting that their brain is having trouble adapting to the changed world.

The problem here is if Booker and Elizabeth travelled to a completely different world, it shouldn’t matter if these two random characters died in an alternate one or not. It’s a whole new world, where they didn’t die. The fact that they apparently remember being dead, but are suddenly alive, suggests the theory I am asserting. When Elizabeth opened the tear and introduced the new variable, it forced their current world to reboot (for lack of a better term). Incidentally, for this new variable to make sense, these two characters were brought back from the dead. This creates a paradox, thus their maddened state, because what Elizabeth is doing to the world is not stable or even natural.

This helps to explain a lot of other concerns that come up during the story as well. For one, we see after the introduction of the second variable that another Booker existed for a brief period, who became a hero of the Vox Populi cause, having already gone to Monument Island, finding it deserted, and Elizabeth supposedly taken away. Despite this, there is no second Elizabeth, and Comstock and Songbird are still trying to reclaim her from you (the player) specifically, making no reference to her needing to have been somewhere in their possession. Additionally, the damage that you caused to Monument Island near the beginning of the game is still shown to have been done near the end of the game. 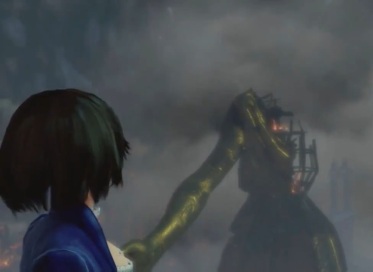 The extra Booker, though a little problematic, can be easily explained by the fact that he is already a foreigner to the game’s specific universe. All it would suggest is that the variables introduced required that details had to reboot far enough back in time that Booker had to arrive in the universe again, but because of the variables still active (the damage of Monument Island and Elizabeth’s absence from that place) he instead followed an entirely different path. 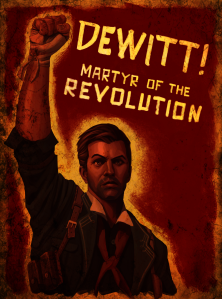 All in all, it does sound all very paradoxical, but that’s a lot of the point of what’s happening in the story as well. The Lutece twins are compelling you through your mission not necessarily to right a moral wrong, but to fix what is broken about reality. Too many things are where they shouldn’t be, and although you’re breaking the world more and more as you progress, the ultimate end-game is meant to correct all that, preventing all of it from ever happening in the first place. You can’t make an omelette without breaking a few universes.

Those are my thoughts on some specific aspects of Bioshock Infinite’s story. I feel that the explanation is sound, and helps to fill a lot of small plot holes, but let me know what you think. Does my theory hold up, or have I missed something? I’d love to hear anyone’s thoughts on it.