This past week I finished watching the second season of Breaking Bad. The last time I wrote about the series I was only two episodes in. Now that I’m a good two seasons in, I figured it’s as good a time as any to share my experience with the series now that I’ve made significant headway.

Right off the bat, not surprisingly, I love the series. While I would have liked to have watched it as it was being released, I find it very interesting to watch knowing the little tidbits that I do. While I understand that Walter White rises up in the drug world in a big way, at this point he is still a very small fish, and I appreciate that they’re taking their time with it. I can see the foundation for what he will/may become, but teamed up with Jesse the two are still very much amateurs.

One thing that I really like is how they’ve begun to invert the preconceptions of who the pair are. While at first Walt is the law-abiding man acting out of desperation and Jesse is the drug dealing/using criminal, it became especially apparent in season two that Jesse is the one who might actually be too good-natured for the business.

This became especially clear in the episodes “Peekaboo” where Walt pushes Jesse to act as an enforcer when one of their dealers has been robbed. He finds himself severely comprised by the presence of a neglected child of the couple he is there to deal with, and is quickly in over his head. Even when things to in his favour as the couple turn against each other he screams out in dissent. Despite being in a situation where both would stab him in the back without a second thought, he does not want to see someone killed.

Inversely, Walt can be very ruthless when things come to a head. He didn’t appear to be against the idea of killing Badger, pushed Jesse to expand territory, and has an increasingly aggressive nature toward the business. The persona of Heisenberg is shining through in him a lot, laying the foundation for what is to come. 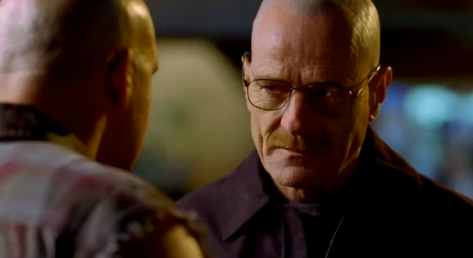 One gripe I’ve had so far with the series I didn’t realize I had until close to the end of season two. In the episode “Phoenix” after Jane had relapsed into heroin and began using with Jesse, she blackmails Walter into handing over Jesse’s share of their latest sale, despite him not wanting to until Jesse can prove his sobriety.

While I had liked Jane a fair amount before this time, it started to appear to me that she was using Jesse as a means to an end — once she found out how much money he was owed — rather than having legitimately strong feelings toward him. This was evidenced by the fact that she continued to keep her relationship with him a secret from her father, and her ability to sound sincere to a loved one (her father) without really meaning it. I understand that a lot of her behaviour is consistent with that of a severe addict, and doesn’t make her a terrible person outright, but it quickly made her unlikable to me. Before she could be fully fleshed out she became an obstacle.

This is the core of the problem I realized: of the prominent female characters in the show, there hasn’t been a single one I’ve liked so far. Skyler and Marie are aggravating, and Jane became something that needed to be dealt with for the narrative to progress. In the case of Skyler, I do think she is an excellent character and very necessary to the plot, but I find her to be a predominantly negative presence nonetheless. I don’t consider this to be a damning criticism of the series thus far, despite the word count I’ve dedicated to it, but I would appreciate, and hope, that some female characters come along that add to the cast more positively.

Overall, I do find the series to be fantastically written and performed. With the addition of new characters like Saul Goodman, Gus, and Mike, I am eager to continue.