This post contains some spoilers for The Dark Knight Returns 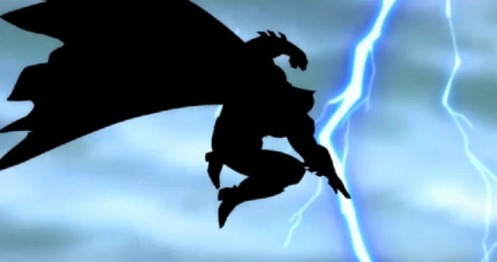 This past week I finished watching part two the DC Comics animated release of Batman: The Dark Knight Returns, which adapted the comic book miniseries of the same name by Frank Miller and Klaus Janson released in 1986. Set in a dystopian near-future (relative to the 1980s) version of Gotham City, an aged Bruce Wayne (55 years old) returns to his role as Batman, after 10 years of absence, in an effort to quell a resurgence of violent crimes afflicting the city.

Part one deals with his return to crime-fighting — Gotham having a very polarized response — and his campaign against the Mutant street gang that has been ravaging the city. Part two deals with the consequences of his actions spurring the return of the Joker, as well as attracting greater negative attention from Gotham City Police and the U.S. government.

While as a whole I found the entire two-part movie to be very well done, and an excellent adaptation of a great miniseries, it made me realize a lot of feelings I have about Batman as a character and the stories he appears in.

When I first heard the movie was divided into two parts, I was admittedly a little cynical about it. That means double the DVDs you have to buy, or more money you have to pay for a deluxe collection of the two. After watching it, however, I find that from a storytelling standpoint it was crucial to divide the story into parts. My reasoning for this is just how much I ended up loving part one. I love the premise of the story, and part one caters to this most purely. Had it been a part of a very long, singular movie, it would have been too overshadowed by the magnitude of later story elements.

In part one we see Bruce Wayne become fed up with the state of Gotham, him struggling to get back into the swing of things, and real perspective on the fact that being Batman isn’t a job one could do forever. He eventually overcomes these obstacles, as we want to see through the narrative’s progression, but it handles things in a more grounded fashion.

Once part two gets going, the fact that the story is about an aged Batman becomes a lot more secondary to the story, especially after the conflict with the Joker is settled. Things eventually lead to Batman in conflict with not just the city authorities, but with the White House and Superman. I don’t feel like the progression to this state was unnatural or badly written, but I realized that it runs a little contrary to what I want to see from a Batman story.

For me, Batman is at his best when the story is more centralized and personal. The character has become larger than life in real-world cultural perception, but fundamentally he is an extraordinary mortal man with no actual superpowers. We perceive him to be able to tangle with villains as powerful as gods alongside the Justice League — which I don’t have a problem with — but his roots have always been that of a street-level hero. For me, he is at his best dealing with crime lords and psychopaths that threaten his city, not a nation’s government embarrassed at how much better of a job he is doing.

I appreciated the tension of Batman’s return to crime fighting, when the clumsiness that comes with age almost got him gunned down when trying to climb his grappling hook, or when his battle against the leader of the Mutants almost got him killed. Despite it being a story I’m familiar with, I felt significantly more invested in that struggle than I did during his showdown with Superman. The first felt a lot more realistic, which made the payoff more exciting, while the latter required me to more consciously suspend my disbelief.

These larger scale problems that Batman faces feel too big for the logical limitations of the character. I understand that it is very commonplace for him at this point and I don’t reject the idea when it is done, but I feel that the premise of The Dark Knight Returns lends itself better to having a more grounded story throughout. If anything, I think they should have focused more on his conflict with the Joker to top the story off. It’s about a 55 year old man returning to crime fighting — a job he was too old for when he quit — and that premise is ripe enough with storytelling potential without needing a climax against Superman.