Lionel Essrog is Brooklyn’s very own self-appointed Human Freakshow, an orphan whose Tourettic impulses drive him to bark, count, and rip apart our language in startling and original ways. Together with three veterans of St. Vincent’s Home for Boys, he works for small-time mobster Frank Minna’s limo service cum detective agency. When Frank is fatally stabbed, one of Lionel’s colleagues lands in jail, and the other two vie for his position, and the victim’s widow skips town, Lionel’s world is suddenly topsy-turvy, and this outcast who has trouble even conversing attempts to untangle the threads of the case while trying to keep the words straight in his head. 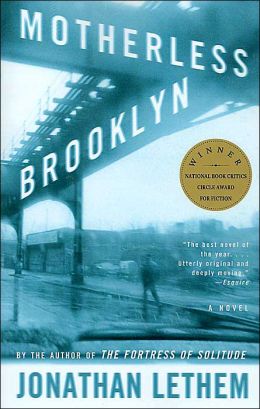 First published in 1999, Motherless Brooklyn is a postmodern homage to classic detective fiction, with its own particular twist thanks to Lionel’s condition. While it stands as a good piece of the genre on its own, what I found most intriguing about the novel, probably unsurprisingly, was Lionel’s Tourette’s. The narrative is told from a first person perspective, so we get a rather deep, personal look at what having the condition is like for him as he moves through life and tries to solve the case while at the mercy of his prominent tics.

On the surface his behaviour can be humorous, inspiring some laughs from me as he barks at inappropriate times and literally skips away from being interrogated at gunpoint. A unique feeling of tension is created as well, since under most circumstances he cannot control his impulses to tic. Moments where discretion and being inconspicuous would normally be easy enough become something difficult for him to handle as he must fight against himself in order to maintain his cover.

More importantly, his condition worked as a strong stand-in for mental illness in general. He is viewed as disruptive, dismissed as crazy or a freak, and scornfully treated like a fool. This is done not just by members of the community, but everybody he is close to as well. An acquaintance, whom he is not fond, even insists that it is a joke Lionel is putting on, refusing to believe he legitimately cannot help his tics.

Obnoxious, unusual, and hard to ignore, his tics help emphasize people’s lack of understanding of mental illnesses by forcing them to deal with his behaviour, which does not have the more subtle symptoms of depression, anxiety, and other common ailments. A moment that perfectly captured this was between Lionel and Tony, one of his “Minna Men” companions. Tony tells him to be serious, and Lionel replies “I’m always serious. That’s the tragedy of my life.” The weight of this statement, unfortunately, goes largely ignored by Tony.

Lionel nevertheless proves to be a capable detective, though it was clear to me his abilities had not quite been tested this much before. His best attribute is that he never lets his condition stop him from trying to do pretty much anything. He understands and accepts it, never lamenting the slings and arrows of others (save for a few particular instances), and rarely apologizes for it.

His objective is simple — find the person responsible for Frank’s death — but this person’s identity is tied up in a web of mysterious connections, the knowledge of which he was deemed not privy to. This mystery kept me intrigued throughout as well, although I felt the payoff was a little underwhelming. I’m not sure if it was the obscurity of how all the information connected, or the labyrinth of language that is Lionel’s narration, but it felt to me like it should have been leading to something more climactic than it did. Nevertheless, it was a strong personal journey for Lionel, and there was a lot of value in that alone.

Motherless Brooklyn is a great homage to the detective genre, playing with a lot of the tropes and motifs that feel familiar, even to those who are not more deeply versed in the genre. At the same time, it is a journey through the densely worded mind of its Tourettic protagonist, whose world is a cacophony of language, sounds, and gestures. I highly recommend this novel; it was an enjoyable read while also presenting me with a unique and challenging perspective.