Haunted by a failed love affair and the darkest of family secrets, Waldemar ‘Waldy’ Tolliver wakes one morning to discover that he has been exiled from the flow of time. The world continues to turn, and Waldy is desperate to find his way back—a journey that forces him to reckon not only with the betrayal at the heart of his doomed romance but also the legacy of his great-grandfather’s fatal pursuit of the hidden nature of time itself.

Released in February of this year, John Wray’s The Lost Time Accidents is a story about a family’s obsession with the nature of time. Narratively framed by Waldy Tolliver, who has found himself “exiled from time,” the novel tells the history of numerous generations of his family as written by him, his intended audience being his former lover Mrs. Haven.

The Lost Time Accidents, or more simply “the Accidents,” are cryptic words on the final page of notes Waldy’s great-grandfather Ottokar Toula wrote on the day he died, a day he supposedly learned something revolutionary about time itself. This final page was the only one recovered, propelling his sons and their descendants down a path to understand what he’d discovered. END_OF_DOCUMENT_TOKEN_TO_BE_REPLACED

At this point, there’s no denying how much we seem to love side-stories and prequels to series and franchises we know and love. Whether it is Better Call Saul spinning off from Breaking Bad, The Wind Through the Keyhole filling a gap between books in the Dark Tower series, or Fantastic Beasts and Where to Find Them giving us background on the world of Harry Potter, it would seem we can’t get enough.

I’m personally fine with them, for the same reasons as many others: we get to spend more time in these worlds with these characters. What does sometimes bother me though is a side-story that seems to exist for its own sake. The importance of a prequel or side-story to me is that it adds something. Most the time the main series works as a cohesive story all on its own, so a side-story had best add something that expands my understanding of what was going on and who these characters were, or explore a detail in the world that was a smaller piece of the big picture. END_OF_DOCUMENT_TOKEN_TO_BE_REPLACED

Set in the Marvel Cinematic Universe (MCU), Daredevil season two continues the story of Matt Murdock (Charlie Cox), a blind lawyer who fights crime as the hero Daredevil in the Hell’s Kitchen neighbourhood of Manhattan, New York City. This season sees him crossing paths with Frank Castle (Jon Bernthal), a lethal vigilante that goes by the name The Punisher, as well as the return of Matt’s former lover Elektra Natchios (Élodie Yung), who was only briefly mentioned in season one.

I’ve heard criticism for the first season in the year since it came out, discussing how it dragged on a little too much and certain characters didn’t quite hit the mark, among other things. While I feel more positively about it than those critics, its weaknesses became more apparent to me as I watched season two. Not without its own problems, the second season of Daredevil presents a great story that builds upon what was established in season one, taking the show to greater heights. END_OF_DOCUMENT_TOKEN_TO_BE_REPLACED

As it moves towards a seemingly inevitable collision with a malevolent red star, the Discworld could do with a hero. What it doesn’t need is a singularly inept and cowardly wizard, still recovering from the trauma of falling off the edge of the world, or a well-meaning tourist and his luggage which has a mind (and legs) of its own. Which is a shame because that’s all there is… 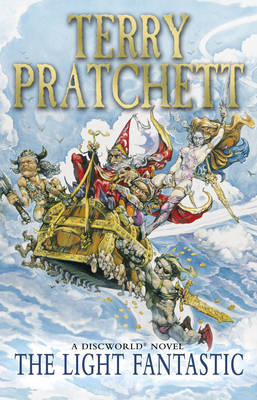 The Light Fantastic by Terry Pratchett is the 1986 follow-up to The Colour of Magic and the second novel in the comic fantasy Discworld series. The story continues right where the previous one left off, following Rincewind and Twoflower as they travel across the disc. This is unique among Pratchett’s extensive series of books, which are otherwise self-contained stories with recurring protagonists and characters. END_OF_DOCUMENT_TOKEN_TO_BE_REPLACED