The Incredible Hercules: Against the World 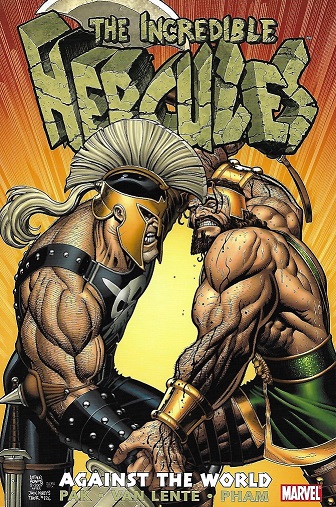 From Hulk to Herc and still Incredible! WORLD WAR HULK is over, the man-monster Hulk defeated and imprisoned following an earth-shaking battle that left both allies and enemies struggling to pick up the pieces. Having sided with the Hulk, legendary demigod Hercules and boy genius Amadeus Cho are now outlaws, a situation further inflamed by Cho’s grudge against the super-spy agency S.H.I.E.L.D. and Herc’s feud with his estranged half-brother — Ares, god of war, who isn’t above abusing his new federal clout for the sake of sibling rivalry. It’s Marvel’s mightiest manhunt, guest-starring Wonder Man and the Black Widow – plus an untold tale pitting Hercules against the Incredible Hulk!

Yet another book I’ve had for a while, I have a vivid memory of picking this up at a specific comic shop, but no recollection of why I did. Before I started reading I had no idea what the story was about, nor where it was situated in Marvel canon — though I had a vague idea of the latter. The story immediately follows the event World War Hulk, which saw the Hulk returning from exile into space to seek revenge on the Avengers who cast him away.

This volume collects Incredible Hulk #112, Incredible Hercules #113-115, and the one-shot Hulk vs. Hercules: When Titans Collide. Interestingly, despite the issue numbers above and the character’s long history in the Marvel Universe this is apparently Hercules’ debut solo series, which I did not know. The run would last from early 2008 — starting with the first of these issues — until early 2010. Two sequel mini-series have followed.

Though it follows a large-scale event in the Marvel universe the story is very easy to jump right into. The conflict that precedes it, though I haven’t read it, is easy to understand, as are the consequences the characters are dealing with from it. As it turns out, Hercules sided with the Hulk and becomes a fugitive along with his young genius side-kick Amadeus Cho, who keeps a coyote pup in his jacket.

The two play off of each other very well. They have a lot in common when it comes to their confidence in themselves, while also contrasting nicely between Herc’s impulsive brawn and Amadeus’ calculated brains. Despite his recklessness, Hercules also serves as Cho’s flawed moral compass, since the youth has a skewed sense of morality along with a rebellious nature toward authority.

The story balances over-the-top action, humour, and genuine heart to make a surprisingly compelling read. As heroes go I assumed Hercules would be more one-note, but he’s actually quite flawed and troubled for a “hero of all heroes,” as well as funny thanks to his fun-loving, brazen nature. He’s represented quite faithfully to the mythology, which the writers went to considerable lengths to incorporate it into the story, much to my enjoyment. References to older comics are made as well, poking fun at outdated character designs and making obscure callbacks to long-forgotten series.

Ares plays the part of the villain throughout much of the book, and his rivalry with Hercules is both believable and hilarious to behold. They both push each other’s buttons so well, and the fact that they’re immortal and family makes it a more unique hero/villain dynamic. While Ares often seems to be trying to kill him it feels more like a family squabble than anything else, and I loved that.

Ultimately, the plot was not overly complicated, but served in presenting/introducing the series’ characters exceptionally. I started off expecting this to be a one-off read for me, but now I want to pick up the subsequent volumes.

I particularly enjoyed the pencil work done by Khoi Pham, which again was a slightly rougher style than the more polished looks in comics that heavily idealize the characters. I don’t mean to speak ill of the latter kind of style, but it does occasionally make characters look like they’re made out of plasticine. The art had a more natural look to me without sacrificing on the scope of a superhero story like this. The larger-than-life nature of Hercules is wonderfully represented along with other characters, but there’s also a level of grit to it that especially captures the fury of battle well. His more rampaging side is particularly showcased, though even with his wits about him Hercules often has a berserk look to him that I really liked.

The only extra included in this volume is the one-shot Hulk vs. Hercules: When Titans Collide, which is deceptively more complex than it sounds. What I thought would be a simple little side-story pitting the two against one another was presented much more like a myth that showed more complicated sides to both characters. While the story is an incident from the past, it is framed through Athena who is telling it to Amadeus following the events of issue #115. It made sense why it was produced separately, but it still tied into the story well and added something meaningful to it.