As Batman hunts for the escaped Joker, the Clown Prince of Crime attacks the Gordon family to prove a diabolical point mirroring his own fall into madness. 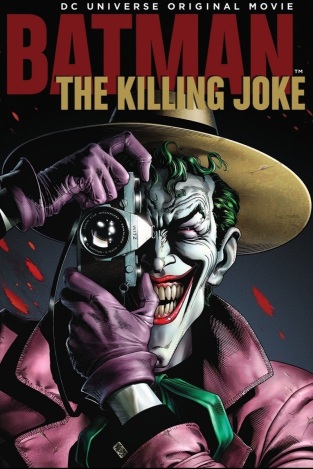 Batman: The Killing Joke is the highly anticipated animated adaptation of the famous 1988 one-shot graphic novel of the same name. Originally written by Alan Moore and illustrated by Brian Bolland, the story tells what many consider to be the definitive origin of The Joker, exploring the character’s psychology and drawing upon the similarities between him and Batman. This adaptation is written by Brian Azzarello and directed by Sam Liu.

The Killing Joke is quite possibly my favourite Batman story, so I was quite excited when I heard it was finally being adapted, with Kevin Conroy and Mark Hamill returning to voice the roles of Batman and Joker respectively. The movie also sees the talents of Tara Strong as Batgirl/Barbara Gordon and Ray Wise as Commissioner James Gordon. Performance-wise I think the voice actors did a great job with the material, Hamill and Conroy standing out the most.

I’ve always loved this story for how it presents Batman and the Joker’s relationship as more than just adversarial. His origin shown through flashback snippets, the Joker is depicted as a much more tragic figure, the origin of his villainous persona steeped in loss just as Batman’s is. Although he is still a maniac and there’s no getting around that, you can’t help sympathizing with who he supposedly was once upon a time. Though I enjoy all this much more as a comic book, it was adapted rather faithfully — at least, The Killing Joke part of the movie was. A lot of visuals have been updated as well, such as character and vehicle designs, to be more recognizable from the campier style of older Batman.

A lot more actions scenes were added too, along with more additions to Joker’s plan, and prolonged sequences where Batman is hunting him down. These didn’t feel too out of place, helping to expand upon a story that is actually quite short, despite its notoriety. It’s easy to forget that even by comic book standards The Killing Joke is a rather short story. It is so short in fact, that even with these additions it would have only been about an hour long, if not for the first third of the movie.

This is where I have a bit of a problem with this adaptation; the rather sizeable addition they made to the story. On the surface I like the idea just fine. The first third of the movie is spent fleshing out Batgirl as a character, displaying her aptitude as a vigilante and empowering the character more than how she is represented in the original story. The way the went about doing this, however, did not work well for me. While more interesting than I expected it to be (the crux of it had been spoiled for me before I watched), it felt almost completely disjointed from the actual story being adapted. There is a modicum of cohesion between the two, just enough to put Batman in the state of mind he’s in at the beginning of The Killing Joke, but not enough that it feels like it ought to be a part of the movie.

Ultimately, I think Batman: The Killing Joke is still a great story that this adaptation lives up to, though inferior to the original graphic novel. The animation is great, the voice acting’s stellar, and the story is poignant yet somehow bittersweet. The only place it doesn’t quite hit the mark is the larger amount of new content added, which was well-intentioned but not all that well executed. I do recommend checking it out nonetheless, it is still one of the best Batman and Joker stories around, and the Batgirl addition is are still interesting despite feeling out of place.