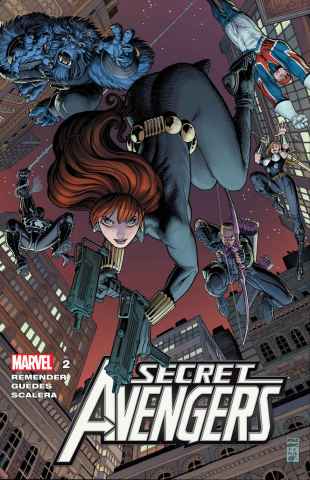 Thor leads a secret team of Avengers on a suicide mission to stop the Phoenix by any means necessary!

Who is Minister Marvel, and why has he drawn the Phoenix to the Kree homeworld? The Avengers devise a way to save the Kree, but one man stands in their way: the original Captain Marvel, reborn to unite his people! Can Ms. Marvel and the Protector break free of Minister Marvel’s influence to aid their former companions? Plus: Can Hawkeye and Black Widow unmask the spy on their team in time to prevent tragedy? And as Hawkeye, Venom, and Ant-Man face the Masters of Evil — an army of villains unlike any ever seen before — to save Max Fury, the Shadow Council’s true goal is revealed! Enter the power of the Abyss!

This second volume of Secret Avengers by Rick Remender collects issues #26-32, originally released in 2012. The plotline of this book is divided in two, the first half connecting to the Avengers vs. X-Men event taking place in the Marvel Universe at the time. This half has the Secret Avengers teaming up with members of the main Avengers team such as Ms. Marvel and Thor, as well as the return of War Machine, who was part of the team before Remender took over.

As far as event tie-ins go, the first half of this volume is pretty decent. It stays in line with the idea of the Secret Avengers — that they work toward preventing a crisis before it starts. Some good little character arcs are woven in as well, for Captain Britain particularly, and notably the deceased Captain Marvel is given a brief return. Enough context is provided to understand the significance of his return, which I appreciated having never read any titles about Captain Marvel before. The involvement of the Kree overall is a little alienating though, as it took me a while to get a firm grip on whether I’m supposed to be learning new developments or if I should have had more prior knowledge. The team’s failure to contain the Phoenix is a foregone conclusion, since the AVX event wouldn’t happen otherwise, but it’s a good connection nonetheless.

The latter half of the book, back to the team and their missions, is where this volume really shines. I had actually forgotten that this book was more than just a tie-in, which pleasantly surprised me. This plot is not as high-concept as the previous volume, but ties up plotlines that started at the beginning of the series (last glimpsed in the prologue to volume one) with the Shadow Council/Masters of Evil including John Steele (the first ever super solider) and Max Fury the rogue Life-Model Decoy of Nick Fury. The continued threat of the Descendants is peppered in but the focus is on this Masters of Evil plot.

Agent Venom takes a prominent focus in the story, his symbiote shielding him from the Abyss, along with Ant-Man. This tighter focus, set up well by context, allowed for stronger character moments. It’s still focused on the team as a whole, but story focus doesn’t feel spread too thin between its members. The plot is once again enjoyably high stakes, in keeping with the black ops angle. There are a lot of prolonged action sequences that were a lot of fun to read too, thanks to the Masters of Evils ranks being heavily populated with supervillains. The villain Taskmaster has particularly good encounter with Venom and the rest of the Avengers, and he was just delightful to read.

In subtle ways the story works in questions of what constitutes life and the troubled existence of the A.I. and artificial beings in the Marvel Universe. It allowed the story to feel separate from the Descendants storyline that will continue later on without brushing it aside completely. It all feels woven together nice and cohesively.

Renato Guedes’ art in the AVX tie-in has a nice, clean look to it. Colour is used really well and the shading blends rather than the higher contrast shadows from volume one. It looks very nice, but for some reason I can’t help finding the characters’ faces weird. I can’t quite put my finger on it, they just look strange to me. I just can’t get over thinking “That’s not what Thor should look like.”

Matteo Scalera’s art appealed to me a lot more. I’ve noted numerous times my preference for “grittier” art that doesn’t have the stylistic polish and shine of others, and this is no different here. I do prefer it to Gabriel Hardman’s art in volume one, though, which was a little too muddy in comparison. I especially liked how Scalera played with Venom’s size and facial expressions, utilizing the symbiote’s amorphous form to great effect. He also did a great job of making Taskmaster look expressive, at times evocatively mocking, despite only having a skull for a face.

The back of the book includes a variant cover for issue #26 by Joe Quinones and five pages of pencils from issue #28 by Renato Guedes.

Though held back a little by the split in the story, Secret Avengers by Rick Remender Volume Two is still a strong collection, especially the latter half. I’ve always been captivated by how the seemingly random assortment of heroes play off each other so well. Flash Thompson as Venom and Eric O’Grady as Ant-Man are hardly the most iconic pairing, yet the two are forced to work together, trying their damnedest to live up to other legacies (Ant-Man being a more insidious character here), which ramps up the tension wonderfully. Volume One was a bumpier start than I remember, by this volume reminded me why this series has stuck with me after so many years.